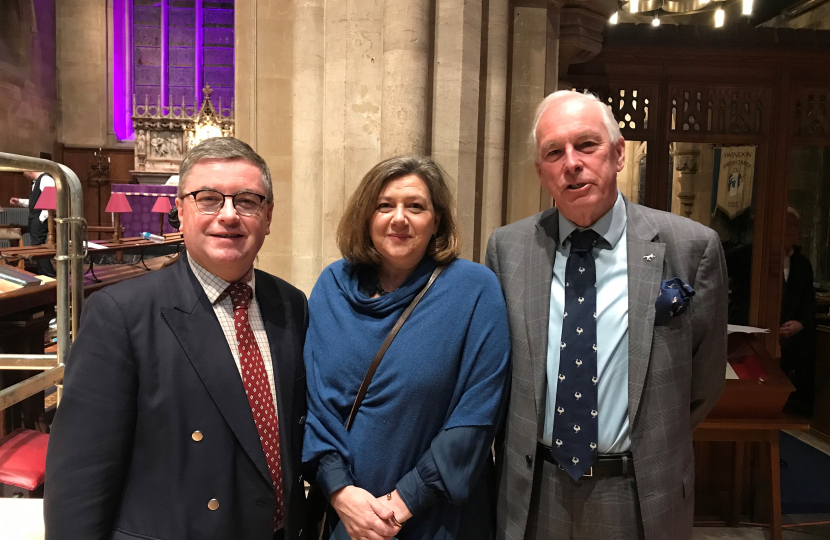 MP Robert Buckland has launched a charity fund with Wiltshire Community Foundation inspired by his experience as the parent of an autistic daughter.

Millie’s Fund, named after his 19-year-old daughter, will support the education of young people with additional learning needs or a disability in Swindon by funding IT equipment such as laptops or iPads, out of school activities, travel costs or study trips.

The Swindon South MP has set the fund up with a £12,000 donation which has been doubled by the community foundation’s Swindon Match Fund. But he is setting his sights on growing it further with more fundraising and by encouraging donations. The fund capital will be invested by the community foundation and the income used to make grants so that it becomes a lasting resource for the town.

“I decided the best way to make sure money was there for families was to set up a bespoke fund with Wiltshire Community Foundation,” he said. “I chose it because I wanted the fund to be administered professionally and in a sustainable way and run to very high standards.

“It was an easy decision to collaborate with the community foundation because of the work it has done in Swindon and Wiltshire. I’ve often publicised the funding it has available to local groups.”

He said he and his wife Sian’s experience of bringing up Millie, who has a twin brother George, has given him an insight into the struggle parents of children with additional needs and disabilities face.

“Setting this fund up seems to sum up my own experiences and do something positive about what on some levels was quite a challenge for me and my family,” he said. “It’s something that none of us ever expect to happen but you have got to make something good out of all these situations and this is my attempt to do that.”

Over the years he has helped dozens of families who have struggled to get a diagnosis or the right support. “For me it’s more than just about my own family experiences, it’s about what more can be done to improve the system and to make life just a little bit more negotiable for those families,” he said.

“I hope this will be an additional resource for families in the Swindon borough bearing in mind we have a number of them struggling on lower income levels and many of them have youngsters with additional needs and with disabilities.

“The equipment they could get, whether it's a dyslexia pen, an iPad or something that can assist with learning, can often be a game-changer and it's that sort of lasting impact that I want to see from any grants and awards that are made from the fund.”

Wiltshire Community Foundation joint chief executive Fiona Oliver said: “We are very proud Robert has chosen to work with us on this fund, which will support our existing education support grants. We are looking forward to seeing the fund grow and hearing the stories of the families it goes on to help.”

Mr Buckland said he thought long and hard before naming the fund after Millie, who is at secondary school. He said: “Millie is a very kind and loving person and she has many, many friends in school who have severe disabilities and significant needs. I know that, were she able to articulate what she wanted, she would be very supportive of wanting to help other people.”

Grants of up to £1,000 are available from the fund. More details of eligibility and how to apply at wiltshirecf.org.uk/grants-and-support/individuals. Donate to the fund at https://localgiving.org/charity/wiltshirecf/project/milliesFund/ or if you would like to organise a fundraising event contact Mr Buckland’s office at robert.buckland.mp@parliament.uk.