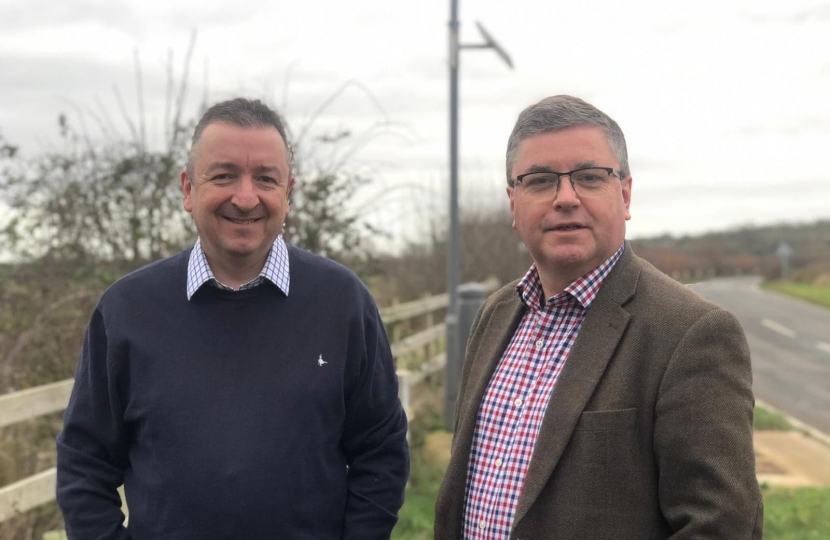 The Government’s Gigabit Voucher Scheme means that every eligible rural home can get a voucher worth £1500 and up to £3500 for small businesses*.

“Following many meetings between myself, Cllr Gary Sumner and BT Openreach, we are pleased to announce that eligible residents in Wanborough and Chiseldon are now able to register their interest in Openreach Fibre Broadband, utilising Government funding.

“Along with Cllr Gary Sumner, Cllr Jenny Jeffries and Cllr Brian Mattock, I am pleased that this option is now available after we have championed the issue of behalf of many local residents.”

We are calling for as many residents as possible to register their interest here: https://www.openreach.com/connectmycommunity

The Government announced in September that more than £22 million of additional funding would be invested in the UK Government’s broadband voucher scheme, which subsidises the costs of building gigabit-capable broadband networks to hard-to-reach areas.

Gigabit-capable broadband enables internet download speeds of up to 1,000 megabits per second (mbps) - enough to download a HD movie in less than 30 seconds and lay the foundations for 8K-quality video streaming and virtual reality online gaming.

This new frontier in digital connectivity has the potential to revolutionise rural communities and make them more attractive places to live. It will give people who depend on reliable connections to work from home and keep in touch with family due to coronavirus, the freedom to live and work more flexibly and will help develop thriving digital economies.

Almost 500,000 premises across the UK have been given access to gigabit-capable broadband since summer 2018 through a £1 billion UK Government funding commitment until the end of 2021.

Nearly 45,000 gigabit broadband vouchers, worth more than £90 million, have already been issued and there is more than £70 million worth of vouchers on offer immediately to take companies and residents in rural towns and villages out of the digital slow lane.

On top of this, the government has promised £5 billion to ensure hard-to-reach areas get access to gigabit connections over the next few years. Details on how this will be spent will be announced this autumn.

* Voucher value can vary based on Local Authority additional contributions but start at up to £1,500 for homes and up to £3,500 for businesses **Terms and Conditions apply

The Gigabit Broadband Voucher Scheme is a UK-wide, supplier-led scheme offering vouchers used as part of a group project, to pay towards the cost of installing gigabit-capable broadband to rural premises, i.e. homes and businesses, providing speeds of over 1,000 Mpbs or 1 Gbps. Beneficiaries do not have to take those speeds and pay only for what they want to use, knowing they can increase them over time. Anyone who is interested uses a postcode checker to find registered suppliers in their area. Their chosen supplier will guide them through the application. For more information and to check eligibility visit: https://gigabitvoucher.culture.gov.uk/

The Government published on Monday its Covid-19 Vaccines Delivery Plan which sets out how we are going to deliver the biggest vaccination programme in British history and protect those who need it most as quickly as possible.