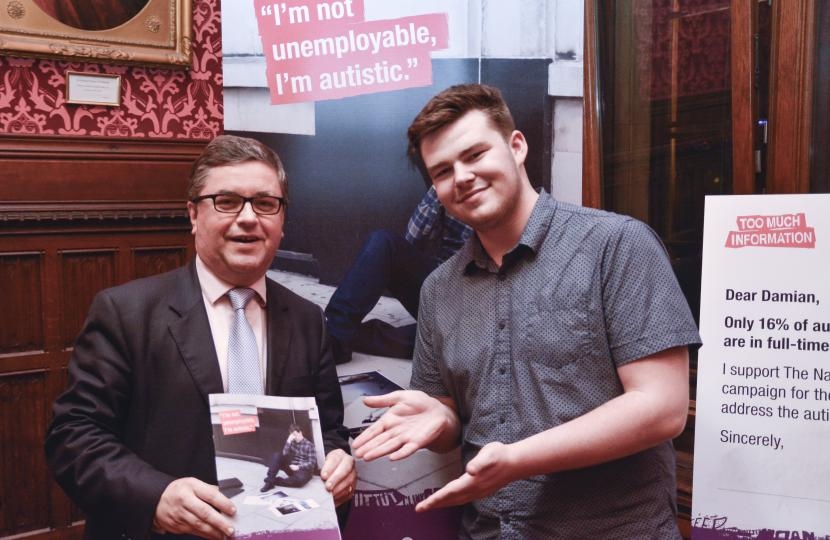 Robert Buckland, Member of Parliament for South Swindon, is welcoming a campaign to close the autism employment gap.  Robert was one of over 100 MPs to attend the launch of a new National Autistic Society report and campaign in Parliament on 31st October, which highlighted the low levels of employment among autistic people.

The campaign is calling for autistic people to have access to specialist support to help them find and stay in work and a national programme to raise employers’ awareness of the skills and potential of autistic people. The parliamentary launch of the campaign comes on the same day as the launch of the Government’s Work, Health and Disability green paper, which sets out its plans to help more people with disabilities and long term conditions into work.

The National Autistic Society has released a short film, shot from the point of view of an autistic adult experiencing ‘too much information’ in a series of job interviews. The film’s star, played by autistic actor Max Green, becomes increasingly overwhelmed by anxiety and uncertainty about what’s being asked of him, to the point where he’s unable to demonstrate his ability to do the job. At the end of the film we see Max, outside the offices, upset and overwhelmed. The film finishes with the message: “I’m not unemployable, I’m autistic”.

Robert Buckland MP said: “I continue to take a strong interest in autism provision and know many families who, like my own, are dealing with autism and what it means. The National Autistic Society estimates that over 1 in 100 people in the United Kingdom alone have autism and I believe that it is vital that we continue to campaign to raise awareness of the condition. I strongly welcome the National Autistic Society’s campaign.

“Many autistic people like Max, from the charity’s campaign video, who I had the pleasure of meeting, clearly have much to offer in the workplace. We need to make sure that employers know this and are able to open their doors to autistic people.”

Robert continued to explain: “During my time as an MP, I have campaigned for the rights of people with autism and served as Chair on an All- Party Parliamentary Group on Autism. The aim of the group is to raise awareness of autism in parliament, and to campaign and lobby for increased awareness and improved support for people with autism and their carers

“When I was the Chair of the All-Party Parliamentary Group on Autism, I established a SEND Commission that aims to improve the experiences and prospects for young people with SEND. This involved taking autistic and SEN concerns straight to the government by providing MPs and House of Lords Peers with evidence and arguments in favour of better support for SEND and autism; a chance these young people would otherwise not have had.  I also introduced a ten-minute Bill to Parliament calling on the government to improve access to health and social care services for people with autism spectrum disorders.

“Locally, I helped to establish a SEND Network for parents, secured autism-friendly film screenings and campaigned to improve health, education and social care services for local children, and I have worked very closely with charities like Ambitious about Autism and the National Autistic Society.”

The autism employment gap is part of the National Autistic Society’s three-year Too Much Information campaign, which aims to transform public understanding of autism and open up the world for autistic people.

More than 1 in 100 people are on the autism spectrum. This means that someone sees, hears and feels the world in a different, often more intense, way to other people. Autistic people often find social situations difficult, can struggle to process information quickly and may be highly sensitive to sound or light or smells. This can make finding and staying in a job very difficult if managers, employers and colleagues don’t understand autism.

Not all autistic people are able to work, but, with understanding from their employer and colleagues, as well as reasonable adjustments to the interview process and workplace, many autistic people can be a real asset to businesses.

Mark Lever, Chief Executive of the National Autistic Society, said: "Autistic people have a huge contribution to make to our economy and society, including in the workplace. But they've been repeatedly overlooked.

“We need leadership from politicians to tackle the autism employment gap once and for all, and so we are really pleased to have the support of Robert. Today’s Work, Health and Disability green paper from the Government starts a welcome conversation about how to open up the workplace for disabled people, including autistic people.

“Many employers tell us they’re keen to recruit more autistic people but they don’t know where to go for support and they’re worried about getting it wrong. So we’re pleased that the green paper sees that employers have a key role to play in reducing the disability employment gap. For autism, businesses can follow the growing number of companies, such as GCHQ and Microsoft, which are supporting autistic people into work through specialist recruitment programmes or work experience.

“We believe there needs to be a national programme to make employers aware of the skills and potential of autistic people. But we also need to ensure that each autistic person gets the autism-specific support they need to find and stay in work.

“Not all autistic people are able to work. But many are and are desperate to find a job which reflects their talent and interests. With a little understanding and small adjustments to the workplace, they can be a real asset to businesses across the UK. Autistic people deserve that chance.”