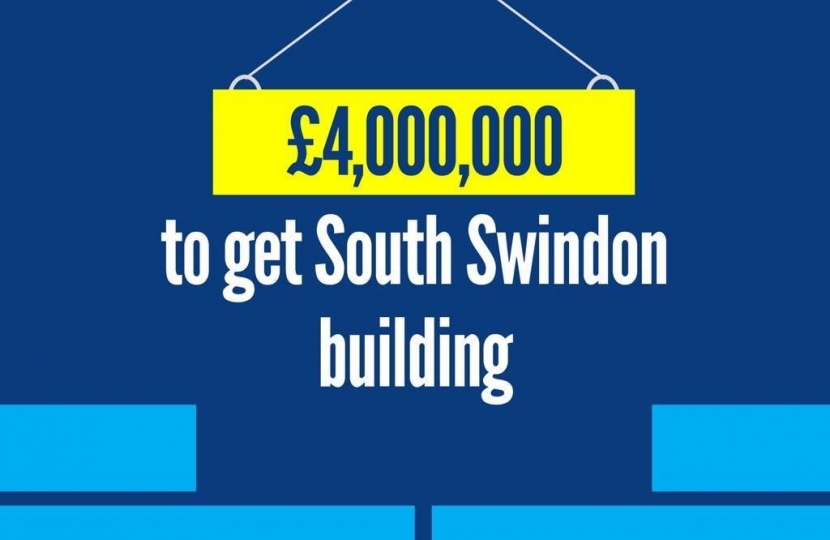 Robert Buckland MP has welcomed the announcement that South Swindon will benefit from £4m of investment, under the Government’s Getting Building Fund.

The £900 million fund, which was announced by Prime Minister Boris Johnson in June as part of the Conservative Government’s New Deal for Britain – an ambitious economic strategy to rebuild Britain after coronavirus, by putting skills and infrastructure investment at the heart of our economic recovery.

More than 300 projects, which have been determined as ‘shovel-ready, have been allocated a share of the fund. In total, the investment is expected to deliver up to 45,000 homes, create up to 85,000 jobs and reduce around 65 million kilograms of carbon dioxide emissions across England.

In south Swindon, the fund will be used on the redevelopment of the Grade II listed Carriage Works.

The redevelopment of the Carriage Works builds on the Council’s commitment to finding sustainable uses for its heritage sites. It is supported by the Heritage Action Zone, which is bringing expertise from Historic England in order to deliver improvements throughout the Railway Village where the Carriage Works is located.

The first phase of the redevelopment of the Carriage Works took place in 2018 with the opening of the WorkShed, a new office space for small businesses.

Last year, the Royal Agricultural University announced plans for a new postgraduate and professional training hub in Swindon to increase the number of trained professionals within the cultural heritage industries.

Despite the coronavirus pandemic, work has continued over the past few months and, if all goes to plan, the Cultural Heritage Institute will be open in September

The funding builds on the commitments made by Boris Johnson and the Conservatives during last year’s General Election to level up the whole country, investing in infrastructure and communities across the whole country. The Prime Minister’s New Deal accelerated more than £5 billion of investment on infrastructure projects, including the Getting Building Fund, while the Chancellor has also recently set out a Plan for Jobs, to support people in the wake of the coronavirus outbreak.

“As we kickstart the economy and begin to recover from coronavirus, never has the Conservatives’ agenda to level up the whole country been so important.

“That’s why I am delighted South Swindon will directly benefit from this Government money – helping to build the infrastructure our community needs while supporting jobs over the months and years ahead.

“The Great Western Works were at the heart of Victorian innovation here in Swindon, so to be able to use these great buildings as a base for Swindon’s up and coming firms is something I’m sure Brunel himself would have approved of.

“Through important funds such as this, we can build our way back to health – with our communities stronger, more united and more connected than ever before.”

“As we get Britain building we are also laying the foundations for a green economic recovery by investing in vital infrastructure for local communities, creating jobs and building environmentally-friendly homes with a huge £1.3 billion investment announced today.

“This Government is determined to level up all parts of the country and this funding will not only give a much-needed boost to our economic recovery, it will help build the good quality, affordable homes the country needs.”