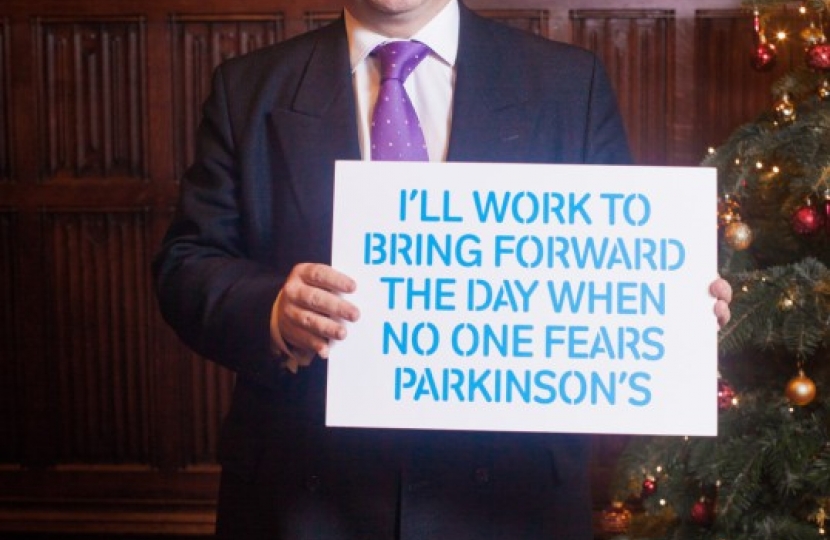 On December 2nd South Swindon MP Robert Buckland joined up to the five-year mission of charity Parkinson’s UK - to bring forward the day when no one fears Parkinson’s.

In the run up to Christmas, Parkinson’s UK is highlighting the issues faced by people with Parkinson’s, a brain condition which can leave people struggling to walk, speak and sleep, and how things need to change.

Parkinson’s affects one in 500 people in the UK, and can cause a myriad of symptoms including insomnia, depression, and hallucinations, robbing people of their independence. But through more research, improved services, and empowering people with Parkinson’s to take control, their lives can be turned around.

Robert joined follow MPs at the charity’s parliamentary reception in Westminster to find out how they could get involved in Parkinson’s UK’s new approach to combating the condition.

Robert met Parkinson’s UK president and actress Jane Asher, as well as people affected by Parkinson’s including Paul McCourt, who has had Parkinson’s for five years and said he ‘crumbled’ when he first heard his diagnosis.

Parkinson’s UK wants to see quality services as standard for the 127,000 people like Paul with Parkinson’s in the UK. They also want people with Parkinson’s to feel empowered to take control of their lives, and to take part in clinical trials in their local area to help find better treatments and a cure in years not decades.

Robert said after attending the event:

“Attending Parkinson’s UK’s event, and hearing from people affected by the condition, really opened up my eyes to just how severely Parkinson’s can affect people in my constituency.

“But it also brought home how small changes, across the community, can have a huge impact. I’ll be doing everything I can to support their commendable mission.”

“It’s brilliant Robert Buckland MP has signed up to help us bring forward the day when no-one fears Parkinson’s. With their support, together we can turn around the lives of people with Parkinson’s.

“We look forward to seeing the difference Robert can make in South Swindon, and how he can help us to keep Parkinson’s on the political agenda.”

For advice, information and support, visit www.parkinsons.org.uk or call our free, confidential helpline on 0808 800 0303.