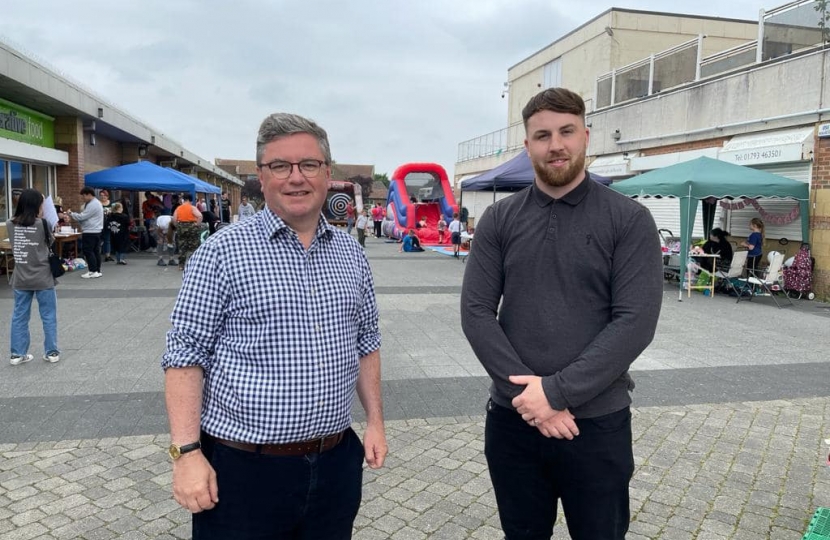 It was a pleasure to catch up with my friends from the Nepalese Association of Wiltshire, as well as local residents, at the Nepalese Cultural Day at GWR Park in Faringdon Road last Saturday.

This free event was one of many events organised by the Nepalese Association of Wiltshire for the local community and included a cadet band display, a Nepalese cultural display, Nepalese food stalls, Nepal tourism stalls, children's rides, a designer saree sale, and Nepali cultural performances.

As part of the event, I laid some flowers with the Mayor and the Chair of the Nepalese Association of Wiltshire to remember those who have died of Covid in Swindon.

The Nepalese Association of Wiltshire plays a very active role in our local community and their volunteers dedicate many hours to organising events like this, as well as regular litter picks across the town. I would like to thank all of the volunteers involved, for their hard work and dedication over the years here in Swindon. This local group makes a real positive difference to community life.

I was also pleased to attend the Cavendish Square Community Day in Park South, alongside Cllr Curtis Flux last Saturday. It was great to see so many friends from the Parks area of Swindon at the event, whom I have got to know well during my time as MP over the past eleven years.

I would like to thank the staff and volunteers at The Shop in Cavendish Square for organising the Community Day, as well as the local community groups who also took part.  This event was much needed and enjoyed by many local families.

Finally, as a member of the Government’s Pet Theft Task Force and also as a pet lover and the proud owner of a grey tabby cat called Mrs Landingham (Mrs L for short), I am pleased that a new criminal offence for pet abduction is set to be introduced under government plans to crack down on pet theft, following a reported rise in pets being stolen during the pandemic. The new law will quite rightly recognise the welfare of animals and that pets are valued as more than property.

The new offence is one of several recommendations in a report published last week by the Government’s Pet Theft Taskforce, which was launched in May 2021.

Since its establishment, the Taskforce has considered available evidence from academics, animal welfare organisations, campaign groups, enforcement agencies and industry experts to help inform its recommendations.

The report found that seven in 10 of the animal thefts recorded by the police involve dogs. Evidence suggests that around 2,000 dog theft crimes were reported to police in 2020, causing considerable distress for owners and their pets alike. The price of some breeds increased by as much as 89% over lockdown as people spent more time at home, potentially making dog theft more appealing to criminals looking to profit from the spike in public interest in owning a pet.

Alongside the creation of a new Pet Abduction Offence, the Pet Theft Taskforce report also recommends that the Government works closely with the police to improve the recording and tracking of pet abduction cases. Improved recording and data collection about these crimes will build a stronger evidence base about the problem.

The report also recommends improving the ownership and transfer of data. New requirements to register additional details and a single point of access to microchipping databases will support tracking lost and stolen dogs.

Finally, the report recommends tackling the fear of crime. Police will work with partner agencies to raise awareness about police initiatives and prevention measures.

All of these changes will make it easier for the police to track pet abduction incidents, making it easier to clamp down on offenders.

The past couple of weeks in the world of politics have been tough – with the sad death of James Brokenshire and the truly horrific murder of David Amess.