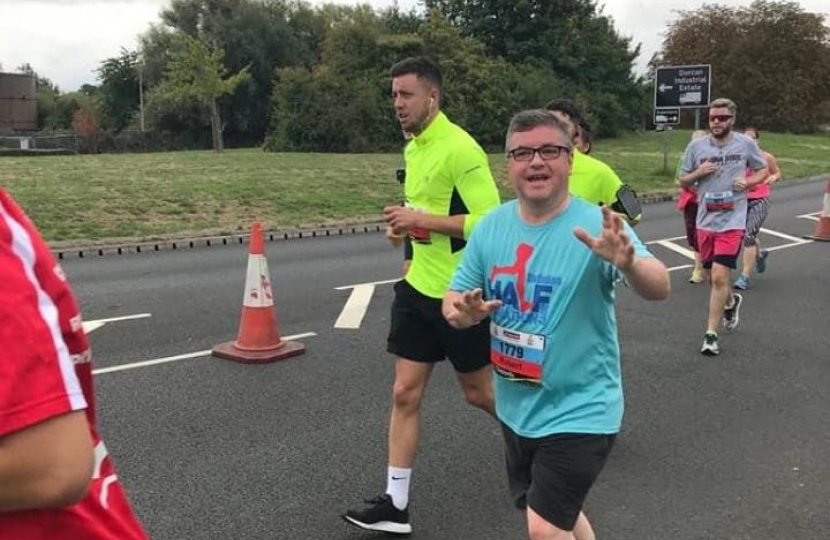 Last Sunday morning, I joined thousands of people at the County Ground to run the Swindon Half Marathon. This is the third time that I have taken part in this excellent local event and this year, I decided to raise money for a charity that is very close to my heart, Hop Skip and Jump Swindon. The charity offers respite care for children and young adults with disabilities and life-limiting illnesses in Swindon and I am trying to help them to reach their goal of £20,000 for a new security fence.

I completed the Half Marathon in 2.39 and felt more than a bit stiff afterwards, but glad that I got around in one piece! You can read more about Hop, Skip and Jump Swindon and make a donation by visiting https://www.justgiving.com/fundraising/hop-skip-and-jump-swindon

I would like to thank all the team at the New Swindon Half for a memorable and well-organised event, and I fully support its continuance. Thanks also to fellow Swindon residents for coming out of support the runners, including my stagger around the circuit!

As part of my ongoing campaign to tackle loneliness in Swindon, it was great to be back at the Zurich Community Trust last week, to learn more about the work of the Generation Gains Programme with charitable social enterprise, GLL. As part of the programme, young apprentices are running fitness sessions for over 100 people aged over 65 in Swindon. I was pleased to hear more about the fantastic local work being carried out and will do all I can to support this programme and others like this in Swindon.

There was good news for us at the beginning of the week as it was announced that Great Western Hospital have exceeded the national standard for cancer patients waiting times in the last three months. The trust, which runs Swindon’s hospital also more than met the target for starting treatment within 62 days of an urgent referral by a GP.

The Government is working with the NHS, charities and patient groups to deliver the cancer strategy developed by the independent Cancer Taskforce. It has committed to ensuring that by 2020, everyone urgently referred with a suspicion of cancer will receive either a definitive diagnosis or the all-clear within four weeks. The Government is supporting this by investing up to £300 million a year by 2020 to increase diagnostic capacity. NHS England has also announced a £130 million fund to modernise radiotherapy across England. Furthermore, the Government invested over £1.2 billion to the Cancer Drugs Fund which has helped over 95,000 people to access the life-extending drugs they need.

The Government has also announced that Great Western Hospitals Foundation NHS Trust has been allocated £0.68m for a scheme that will help with the hospital’s emergency care capacity this coming winter.  You may recall that last winter, the hospital was able to open a new ward with additional Government funding. I am pleased that Great Western Hospital is one of the 81 schemes across the country that has again been awarded extra money from the Government, which will help staff to prepare ahead for the winter over the coming months. I will continue to engage closely with the team at GWH and continue to take a close interest in community health services within Swindon.

Following the naming of two Russian nationals as suspects in the attempted murder of Sergei Skripal and his daughter, Yulia, who were poisoned with the nerve agent Novichok in March, the Government had concluded, from intelligence provided by UK agencies, that the men were part of the GRU intelligence service.

The Counter Terrorism Policing Network and Wiltshire Police officers have worked tirelessly on this investigation since March and continue to do so, gathering and assessing evidence to try and solve this extremely serious crime. I would like to thank the investigation team for their professionalism and dedication.