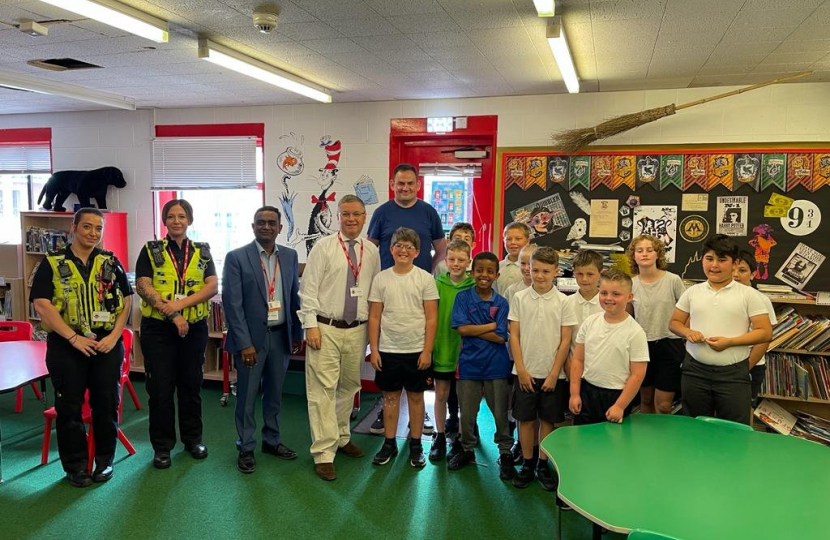 After the pandemic forced the 2020 event to be cancelled, and a smaller parade-less version of the 2021 event, it was wonderful to be back at the Wroughton Carnival last Saturday, as it returned in all its glory. It was great to see so many friends enjoying the parade and entertainment at the carnival as we joined together to celebrate village life and our wonderful community.

Continuing on the theme of community and celebration, last Wednesday, a surprise assembly was organised at Westlea Primary School, by myself, Swindon Town Football Club, and Westlea Primary School Head, Mrs Sumner. Tyrese Shade and Sol Brynn, two of the newly signed STFC players, attended the school to present my Local Community Hero Certificates to the children who were involved in the firearm discovery last month. The children were brave and smart by alerting adults and police, and I wanted to make sure that their actions were recognised and rewarded by our local community here in Swindon.

You may have read in my previous columns about my ongoing campaign to tackle speeding and anti-social vehicle behaviour here in Swindon. I have been working closely with Swindon police and Swindon Borough Council as multi-agency work continues to take place. I am pleased that Swindon police ran a successful operation at the weekend, following an expected car meet in Swindon. Whilst a number of people and vehicles turned up, it was mainly local people from Swindon, of whom the majority were law-abiding.

Operation Staysail was a carefully coordinated response in partnership with landowners and the local authority, which saw police officers engage with the group, to ensure public safety and minimise disruption to local communities.

The vast majority of car enthusiasts responded positively and as a result of proactive policing two arrests were made during the evening. One person was arrested on suspicion of driving whilst unfit through drink and drugs, and the other on suspicion of Section 4 Public Order and assault with intent to resist arrest.

A prohibition was issued on a vehicle for illegal tyres and six penalty notices were issued for miscellaneous traffic offences.

I am pleased that the vast majority of those taking part engaged positively with police officers and agreed to disperse when requested to do so. Police will continue to monitor future reported events and engage with those taking part to ensure public safety and minimise the impact on the wider community in the Swindon area.

I am in the process of organising a multi-agency meeting on behalf of the many local residents who have contacted me to raise concerns about speeding and anti-social vehicle behaviour. I will be asking what action is being taken or can be taken, from a noise point of view with modified exhausts, etc, as many West Swindon residents have been in touch with me about this.

Finally, I am pleased to have taken the Cabinet role of Secretary of State for Wales, following the resignation of Prime Minister, Boris Johnson. The issue about the Prime Minister and his character has now been settled. He no longer has the confidence of the Conservative Party, and it was right for him to resign. However, the business of government goes on and I am pleased to be able to help.

Any candidate worth their salt must place themselves firmly in the shoes of the people we serve and concentrate on the issues that matter – the cost of living and the economy.