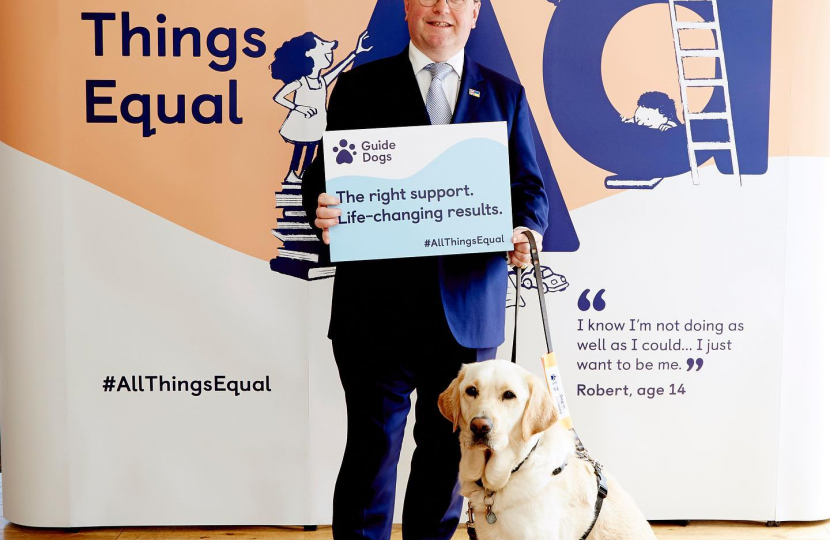 Last week was an inspiring week for me as South Swindon’s MP, with the Pride of Swindon awards taking place on Thursday. It was an honour to meet local champions from all walks of life and to see their fantastic contributions to our community recognised.

Among the winners were the healthcare heroes who built up the town’s defences against Covid-19, getting hundreds of thousands of jabs into the arms of Swindonians – securing for us the freedoms and return to normality that we all now so treasure.

I was pleased to see the Prospect Hospice receive a well-deserved award as well. Prospect has offered free care for 42 years and has made such a difference to the patients and families who have been touched by its end-of-life service. Its volunteers, who do so much to provide comfort and dignity, are more than worthy of recognition and our thanks.

At an event in Parliament, I backed the Guide Dogs “All Things Equal” campaign, which seeks greater support for visual impairment through the special educational needs system. More support must be given to young people at the earliest stage to prevent those with sight loss from being unnecessarily disadvantaged. I have been privileged to work closely with Swindon’s branch of Guide Dogs for the Blind, and I look forward to building on that.

I have also been busy promoting Swindon’s bid to be the home of the new Great British Rail and am grateful to have the backing of my North Swindon colleague Justin Tomlinson and other Wiltshire MPs. Swindon has an unmatched heritage when it comes to the UK’s railways, with there being reminders of Great Western Railway history on virtually every street corner. Bringing the railways home to Swindon in the form of the Great British Rail HQ would be a massive boost for the town, bringing jobs and investment on top of prestige.

As part of my campaign to tackle loneliness in Swindon, which is something that can and does affect anyone, I wrote to all of the schools in South Swindon this week, encouraging them to sign up to become “Care Home Friends”. This brilliant new scheme is designed to bring children and older care home residents together, forming bonds and understanding across generations. Aimed at children between the ages of five and fourteen, the scheme involves activities developed by teachers and related to the National Curriculum. It is my sincere hope that as many schools in the constituency sign up to join this scheme to take the fight to loneliness.

As always, if there is anything that I can be of assistance with, please do not hesitate to get in touch with me via robert.buckland.mp@parliament.uk or on 01793 533393.