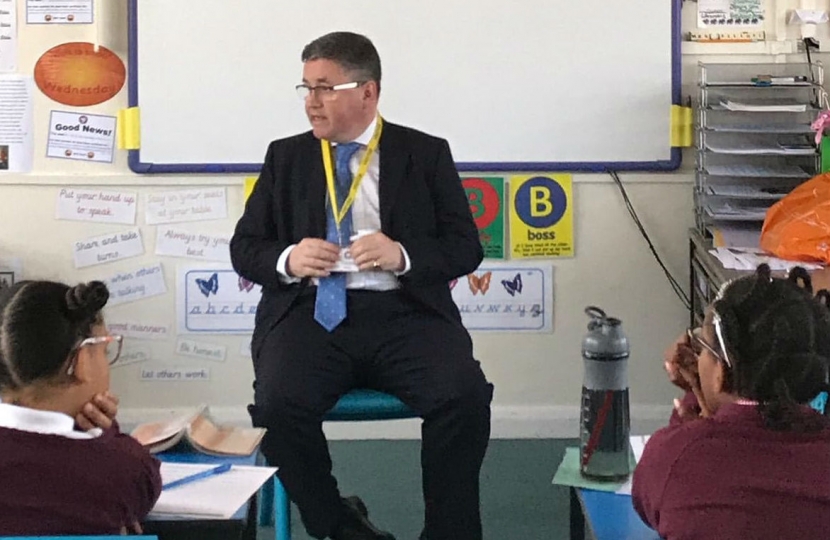 Last week I had the pleasure of once again visiting one of our excellent primary schools  in South Swindon – Holy Family School. It’s always a privilege to visit all of the schools in my area, where I discuss my role as a Member of Parliament amongst other things. This time, Year Five and I had a lengthy question and answer session  about current affairs and in particular the work done by Swindon’s Harbour Project charity to support people who have sought refuge in the U.K.  .

On Bank Holiday Monday, the annual Duck Race celebrated its twentieth event. This is a fantastic local event, organised by Swindon Old Town Rotary Club. This year saw 11,000 little yellow bath ducks take to the water to race each other. The event was held at Wooten Bassett Road and once again saw a large crowd gather to raise money for charity. One particular charity it helped raise money for was CALM (Cancer and Leukaemia Movement), which does a fantastic and vital job helping support families of those children with the condition.

A few days ago came the unwelcome news that the Arcadia Group  announced plans to shut five stores in Swindon - Dorothy Perkins, Miss Selfridge, Burton, Wallis and Evans. I was very concerned to hear about this and I have made contact with the Chief Executive to discuss their plans and see what can be done to ensure this does not have a detrimental impact on our town and employees of the stores. I will continue to keep you updated on all the conversations I am having with the company.

I would like to pay tribute to the Prime Minister Theresa May, who announced she was stepping down. She served our country with duty and determination, both as Home Secretary and as Prime Minister. Amongst many things, she fought Modern Day Slavery, oversaw record employment levels and a huge increased NHS investment.  It is easy to criticise but far harder to be in the arena, trying to deal with the greatest peacetime challenge since 1945.

There will now be  a leadership election. This comes after the European Election results, which were revealed on Sunday. This was obviously a very bad result for both the major parties, but offers a warning to us all that we necessity of responding in an appropriate manner. I think it is essential this is done with calmness and reflection rather than blind panic.

The type of leadership election I would like to see is very different from the past. We are electing a potential Prime Minister, which means we must engage with the membership  and the wider public too. With social media available to us, we can reach a wider audience than we ever have before. I would like to see all candidates tested rigorously on policy, and my advice to all of them is that they should be very clear about their values and be prepared to have them carefully examined.  That is what I propose to do in the weeks ahead.