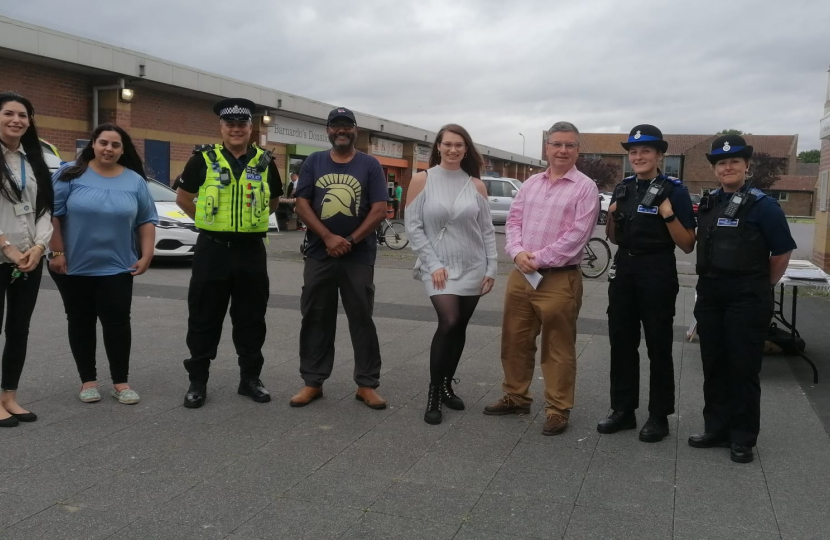 On Saturday, I was delighted to unveil the eleventh Swindon Blue Plaque, organised by the excellent team of volunteers at Swindon Heritage and commemorating William Morris, founder of the Swindon Advertiser and local historian and philanthropist.

Swindon Heritage began the Blue Plaque Scheme in the town in 2016 to permanently celebrate the famous people, places, and events that have contributed to Swindon’s history. Desmond Morris, who is a great-grandson of William Morris sponsored the blue plaque.

William Morris set up Swindon’s first newspaper in 1854, which is also believed to be the UK’s first penny paper. Morris produced the first four-page long weekly newspaper himself, acting as editor, reporter, and printer. By 1870, Morris had renamed the paper The Swindon Advertiser and Wiltshire, Berkshire, and Gloucestershire chronicle, and for the last 168 years, the Swindon Adver has provided the people of Swindon with a newspaper.

It was great to see so many friends at the plaque unveiling, including past workers of the Swindon Advertiser.

Following the Blue Plaque Unveiling, I was delighted to join Cllr Bazil Solomon at the Great East Swindon Community Heritages and Mental Health Weekend at Cavendish Square. It was wonderful to see the local community come together to enjoy the wide range of stalls and entertainment at the Square, including demonstrations from South Asian and African communities as part of South Asian Heritage Month, which included Sari-tying, dancing, and fabulous cooking demonstrations.

As part of my ongoing Speeding and Anti-Social Vehicle Behaviour Campaign, I have written to the Transport Secretary this week, to push for audible cameras here in Swindon. One of the issues raised with me frequently by local residents is anti-social vehicle noise, and acoustic cameras can be used to detect illegally loud engines and exhausts. You can find out more about my campaign and read my letter to the Transport Secretary in full on my website here: https://www.robertbuckland.co.uk/campaigns/anti-social-vehicle-behaviour-and-speeding-campaign

You may have already read in my previous columns that I am running a “South Swindon’s Favourite Pub” Competition as part of my ongoing Local Business Support Campaign.

We are lucky here in Swindon to have many brilliant pubs, which are truly at the heart of the communities they serve. I will do my best to visit all of the pubs who have signed up for the competition, and I am calling on local residents to join me in supporting our local pubs this summer, after what has been a challenging few years.

Local residents can keep up to date with the competition by following https://www.facebook.com/robertbucklandofficial on Facebook and https://twitter.com/RobertBuckland on Twitter

You can vote for your favourite south Swindon pub here: https://strawpoll.com/polls/GeZANJEdJyV/

Finally, my Local Charity of The Week is Willows Counselling and Training, whom I have worked closely with during my time as MP for South Swindon. Willows has been in operation here in the town for over thirty years, offering a safe space for adults dealing with difficulties such as anxiety, grief, depression, and stress, as well as expertise in working with those impacted by abuse and trauma. They offer affordable and accessible counselling to adults in the greater Swindon area. Willows also provides a thriving training service providing training qualifications in counselling from introduction to post-qualifying diploma.

More information about this excellent local charity can be found on their website https://www.willowscounselling.org.uk/

If you are a local charity and would like to become my 'Local Charity of the Week' please get in touch! robert.buckland.mp@parliament.uk