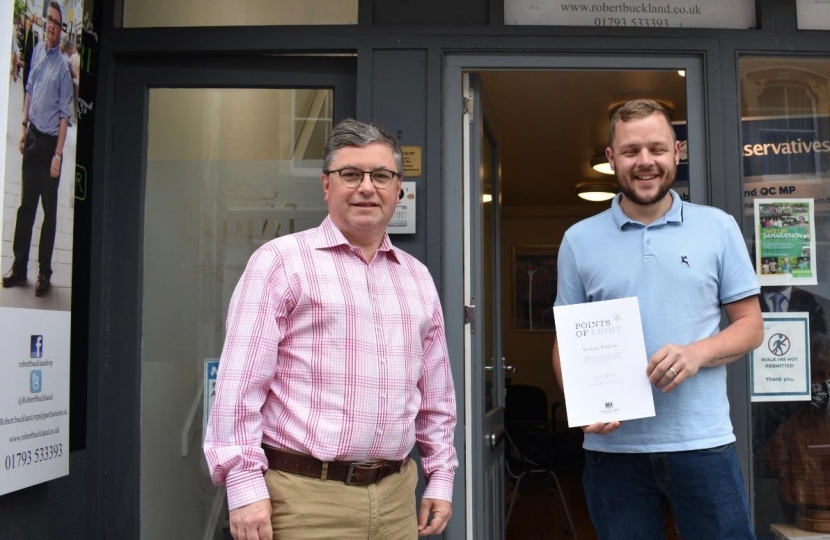 Although the weather wasn’t great, I was very pleased to attend the Topping Out Ceremony at the Oakfied Development in East Walcot on Friday. This development, which has been pioneered by Nationwide and Mi-Space, really epitomizes the best of our planning process. The local community has been involved from the start and Nationwide have managed to consult widely with all sorts of groups and come up with a design that I think is fully in sympathy with the local neighbourhood in East Walcot and Greenbridge. I was pleased to be joined by Joe Garner, Chair of Nationwide at the site, as well as other members of the Nationwide team to celebrate another great Swindon success story.

On Saturday, I was delighted to present Swindon mental health advocate, Samuel Robbins, with a Prime Minister’s Points Of Light Award. Points of Light are outstanding individual volunteers - people who are making a change in their community.

Samuel, who is a trained mental health first aider, created a support group for hundreds of people across Swindon and Wiltshire during the lockdown, providing vital support for many local residents to improve wellbeing. I am extremely pleased that Samuel’s continued hard work and dedication has been recognised and rewarded by our Prime Minister.

In my role as Justice Secretary, last week, I spoke about the government’s action plan and sweeping reforms, following the publication of the rape review.

Too many victims of rape and sexual violence have been denied the justice they deserve as a result of systemic failings.

We are deeply sorry for this and will not rest until real improvements are made – from transforming the support given to victims, to ensuring cases are investigated fully and prosecuted robustly.

Alongside the new laws we have introduced in Parliament to make sure rapists spend longer behind bars, our action plan will drive the change needed to tackle this horrific crime and restore faith in the criminal justice system.

The plan details specific actions for each part of the criminal justice system. Key measures include returning volumes of rape cases going through the courts to at least 2016 levels by the end of this Parliament. This will mean that over a thousand more victims will see their cases proceed. We will also publish regular data to show timelines, quality of cases and victim engagement to show how the whole criminal justice system is performing. We must provide transparency and accountability. We will also provide better data extraction technology, enabling up to 10,000 devices each year to be processed at the earliest stage of an investigation. We will work with the mobile phone industry to support police efforts in proving ‘swap out’ phones for victims.

Rape and sexual violence are horrific crimes that devastate lives and tragically, brave victims who have come forward to report have been too often let down by the criminal justice system. This must change immediately.

Finally, I was pleased to steer though a change in the law to allow couples a greater choice in England and Wales with outdoor civil wedding and partnership ceremonies set to be legalised for the first time on 1st July.

A couple’s wedding day is one of the most special times in their lives and this change will allow them to celebrate it the way that they want.

At the same time, this step will support the marriage sector by providing greater choice and helping venues to meet demand for larger ceremonies.