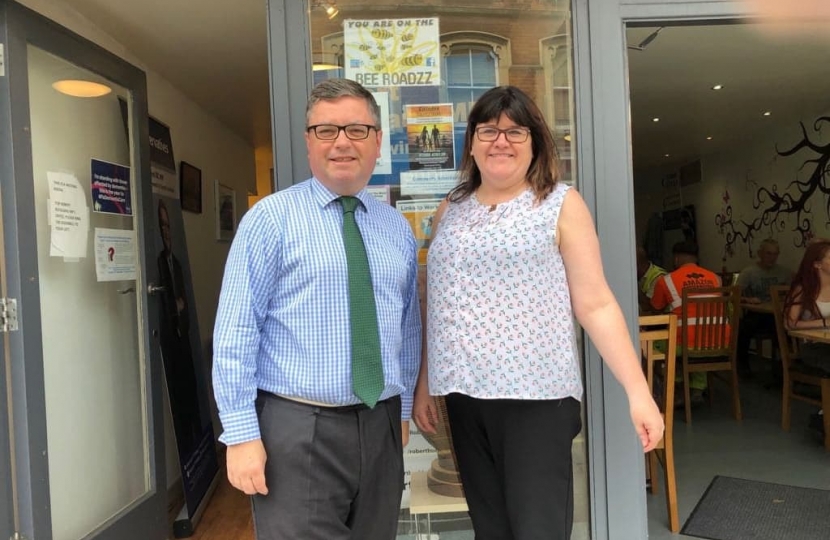 As the school holidays begin, Parliament will also begin its Summer Recess this week.  Recess is a welcome opportunity to spend even more time at home here in Swindon, visiting local businesses, organisations and charities, as well as holding local advice surgeries and meeting with local residents, whilst also being able to see a bit more of my family during the week.

Living locally in South Swindon and having my office on Wood Street enables me to be both visible and approachable (something all MPs should be).  It also helps to fully ensure that I fully understand the issues that are important to us.

On Friday, I welcomed the opportunity to visit Scrappers Community Boxing Gym in West Swindon.  I enjoyed meeting and talking to local boxers, trainers and volunteers and learning more about this important community resource, which provides health and fitness opportunities for people of all abilities and disabilities.  Scrappers are particularly good at using boxing as a platform to engage young people in purposeful activities and reducing anti-social activity, as well as promoting social inclusion by bringing together people from different areas of our town. I would like to thank all of the trainers and volunteers at Scrappers for their dedication and hard work, which makes a positive difference to our local community.

As part of my ongoing local campaign to tackle loneliness, I also enjoyed meeting with the Swindon Live at Home Scheme on Friday. This developing local scheme offers services and support to help older people lead independent, active and fulfilled lives while offering opportunities for companionship, tackling loneliness and social isolation.  You can find out more about the Swindon Live at Home Scheme and how to volunteer by visiting their Facebook page https://www.facebook.com/Swindon-Live-at-Home-Scheme-387628374953848/

I was pleased to learn last week that Morrisons has introduced a ‘quiet’ hour for shoppers with Autism.  There will be no cages on the shop floor between 9 am and 10 am every Saturday, no stock to be worked, no tannoy announcements, no music to be played, lights will be dimmed and all scanners will be switched to silent on checkouts and self-scan.  This is a brilliant idea to help those with autism who can easily become overwhelmed by all of these issues during a visit to the supermarket.  I will be writing to all local supermarkets to request that they do the same, as well as writing to Morrisons to thank them for introducing this brilliant initiative and asking for this hour to become a permanent regular weekly routine.

As Solicitor General, I have been busy dealing with serious cases which I have referred to Court of Appeal judges to decide whether or not they were unduly lenient; in other words, way too low.  Serious crimes such as attempted murder, causing death by dangerous driving and forced marriage have been amongst the issues considered.

An unusual case involved fraud and cruelty to animals.  Simon O’Donnell, Thomas Stokes, Edward Stokes, and Daniel Doherty were part of a puppy-farming fraud conspiracy thought to have raised around £2 million. O’Donnell, Thomas Stokes and Edward Stokes were involved in importing farmed puppies from abroad; while Doherty, a vet who practised in West London, provided them with welfare documents, including immunisation certificates, which were used to reassure people who bought the puppies.

Many of the supposedly healthy puppies sold by this group became unwell, leaving their owners with significant veterinary bills, or even the traumatic decision of whether to have them euthanised.

If you have any local or national issues you would like to discuss with me, please get in touch either by ringing 01793 533393 or emailing robert.buckland.mp@parliament .uk