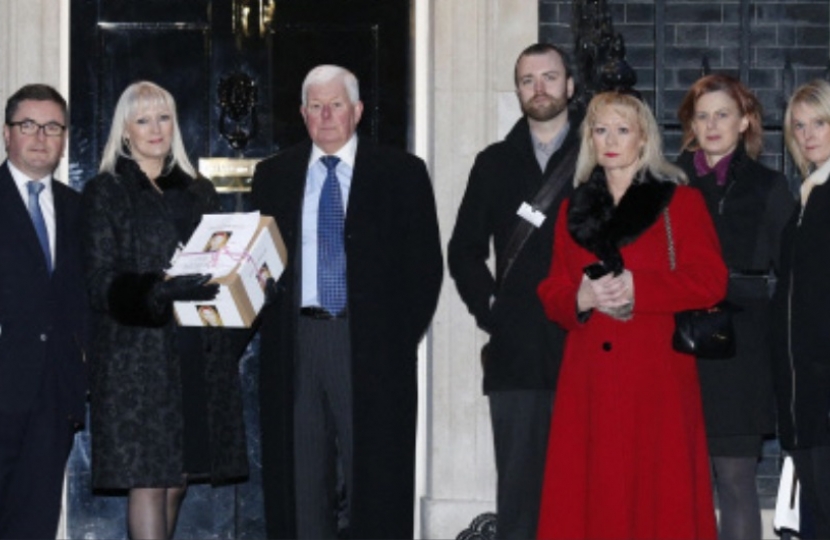 There was good news from Wiltshire Police this week as the force announced that they have begun to adopt the use of body-worn cameras. I campaigned alongside Becky Godden’s mother and my constituent, Karen Edwards, for this change, which is already being put to good use in London.  The use of body-worn cameras will transform the way in which our policing is carried out locally and provide extra protection for police officers as well as the public.

In Westminster news, I recently attended an event to support World Cancer Day 2017. Few families have not been touched by cancer, and mine is no exception, which is why I was pleased to support the event, which brought many of the major Cancer charities together in one place so that Parliamentary colleagues and I could talk to them. The Government is committed to improving cancer outcomes throughout the UK and recognises that investing in research is vital in order to increase survival rates. The UK is a world leader in health research and I welcome the ambitious plans already set out to invest £6.9 billion in the UK's scientific infrastructure up to 2021 which will mean new equipment, new laboratories and new research institutes.

Most of us will be aware of the excellent work of The Prospect Hospice here in Swindon.  This local charity has provided invaluable support to cancer suffers and their families over the past thirty-six years. Recently, staff and volunteers at the Prospect Hospice had cause for celebration when CQC inspectors rated the hospice as good across the board. The comments in the CQC report were a testament to the commitment of the whole team at the Prospect Hospice and their work to ensure that patients feel safe comfortable and cared for at the end of their lives, often in a place of their choosing. Thank you!

In my role as Solicitor General, I recently spoke during a Commons debate on the funding of the Serious Fraud Office. This small demand-led prosecution authority comprises investigators, prosecutors, accountants and other specialists who have the right combination of expertise to tackle the most complex and large cases.  The current funding approach allows the organisation to take on cases which are exceptionally demanding in terms of cost, whilst avoiding the need to constantly maintain high staffing levels, which are not always necessary. Recent victories for the Serious Fraud Office include the first deferred prosecution agreements that have yielded hundreds of millions of pounds for the UK taxpayer, the conviction of a company under the Bribery Act and a conviction by a jury in a case involving manipulation of the LIBOR rate which many of us will remember from the time of the banking crash at the end of the last decade.

On Friday, I paid another visit to Honda with North Swindon MP Justin Tomlinson to discuss the opportunities and risks that leaving the EU will raise for the business and the Swindon factory in particular. Honda made a crucial decision last year to invest in Swindon for their new model and to make the South Marston plant a centre for worldwide exports.  It is vital that we secure the best possible deal for our car manufacturing industry in order to maintain its competitiveness in the years ahead.