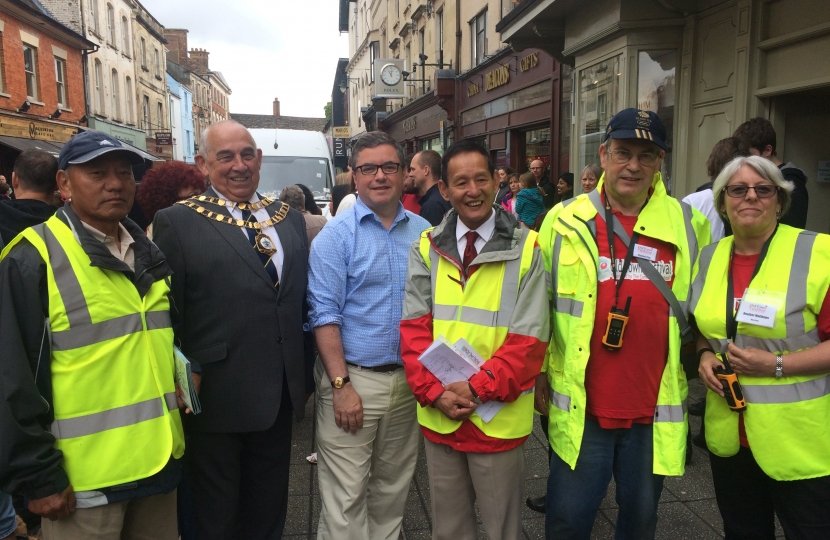 To highlight National Carers Week, I took part in the “Walk A Mile” event in Swindon town centre at the weekend, alongside my friend and colleague in North Swindon, Justin Tomlinson MP.

There are over 21,000 carers in Swindon and each year Carers Week is an important time to raise awareness of caring, highlighting the challenges that carers face every day and recognising the contribution they make to families, as well as the local community here in Swindon.

The “Walk A Mile” event was organised by the Swindon branch of Carers UK, a fantastic charity who I have worked closely with over the years. The Carers Centre work in partnership with other organisations, including local NHS services, Swindon Borough Council’s Adult Social Care and Children’s Services and other local voluntary organisations with the aim of identifying as many carers as possible and to provide the most relevant support for carers across the town. They work hard to raise the profiles of carers so carers themselves have a collective voice in influencing policy makers and service planners. You can find out more about Swindon Carers Centre by visiting http://www.swindoncarers.org.uk/

On Sunday, I opened the Old Town Festival. This year’s event is supporting TWIGS (Therapeutic Work in Gardening) in Swindon, a fantastic local charity who support those experiencing mental health problems. Festival organisers have generously given up their time and worked hard throughout the year to organise a fantastic week of events for all of the family. This is an important event for Old Town but also for Swindon because the festival features such a range of musical and performing arts talent on display from right across the town, and it is a real showcase. A festival programme can be found by visiting http://www.oldtownfestival.co.uk/

My recent work in Westminster has included taking the Investigatory Powers Bill through Parliament, which sets out all of the powers available to the police and the security services to monitor and access communications and communications data.

I know that our police forces, and security and intelligence agencies are working constantly day and night to keep the people of this country safe and secure. It is vitally important that the Government takes all of the necessary steps to make sure they have the powers, the capabilities and resources they need. This bill will also ensure powers are fit for the digital age, restoring capabilities that have been lost as a result of changes in the way people communicate.

Last week, 444 MP’s voted in favour of the third reading of the Investigatory Powers Bill.  The Bill will now proceed to the House of Lords.  The House of Lords will discuss the proposed legislation and the Bill will also be reviewed by the UK's independent reviewer of terrorism legislation, David Anderson QC.

My work as Solicitor General has included taking a case through the High Court, which saw two jurors being found guilty of contempt of court and handed suspended sentences. At the joint hearing at London's High Court, James Smith, 28, from Liverpool, admitted doing internet research during a Liverpool Crown Court trial in 2014. Deborah Dean admitted contempt of court in regards to a Sheffield Crown Court trial. The Lord Chief Justice heard that because of Smith's actions, a 10-week trial had to be abandoned. In the other case, Dean sent letters to two convicted sex offenders revealing details of jury deliberations that she had taken part in in October 2014.

These are both serious examples of juror misconduct where the repeated directions of the judge were blatantly ignored. Contempt of court of this nature involves serious wrongdoing. Any action which interferes with the administration of justice is a serious breach and I hope that this judgment sends a lesson to other jurors about their responsibilities.