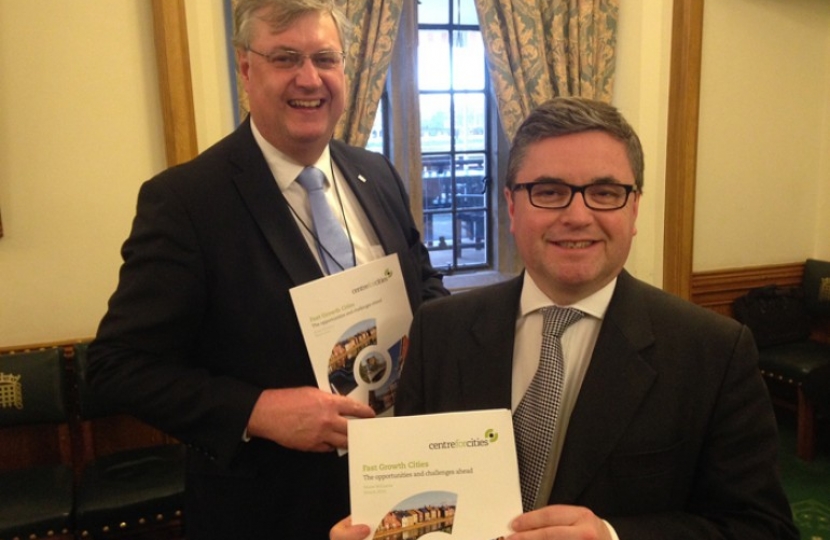 2016 is a very important celebration for our town as we mark the anniversary of the birth of Swindon New Town 175 years ago. Since its humble beginnings as a small market town, Swindon has since become a pillar of growth for the UK with its rich history, thriving business and vibrant communities.

Last Tuesday, I was delighted to be given the opportunity to speak at an event in Parliament about Swindon’s success, following an annual report published by the Centre for Cities, whose publications I have mentioned in previous articles. This new report focuses on the ‘Fast Growth Cities’ group, comprised of Cambridge, Oxford, Milton Keynes, Swindon and Norwich, and contains some of the UK’s most successful towns and cities.  Swindon has been recognised as a place that has huge potential in terms of future growth, and delivers higher productivity levels than cities much larger in size, with higher than average levels of employment.

I have mentioned in previous columns how encouraged I am to see figures which show that we are on the right track and that our local economy is benefitting from the increase in the number of people in work. In January, I welcomed new statistics which showed that wages continue to grow, with average total pay up 2%, while inflation is close to flat. More than 8,000 more people are in work here in Swindon than in 2010, which means that employment currently sits at a record 74%, and the majority of this increase over the last year has been in full-time positions.

Like Swindon, each of the four other members of the Fast Cities Group faces obstacles that it must overcome in order to achieve their ambitions, such as traffic congestion and housing supply. Each of the local authorities in these areas has launched a consortium to push their case within government circles for greater investment in housing, skills training and infrastructure improvement. I don't think that we should let geographical challenges get in the way of our ambitions and see practical cooperation with towns and cities of a similar mindset as the right way forward.

Speaking of employment, I welcomed this week’s launch of National Apprenticeship Week 2016 on Monday. I am a regular supporter of the event, which is designed to inspire young people looking for an alternative to university. The theme for this year’s week is ‘apprenticeship can take you anywhere’, and this couldn’t be closer to the truth. The benefits of taking on an apprentice are substantial.

Around 4,440 new apprenticeships have been started by people in South Swindon since 2010. This means more young people earning and learning, getting the skills they need for a successful and secure future, as they do locally through great employers like Nationwide and Pebley Beach.

It is vitally important that young people in Swindon have the opportunity to get into the workplace, giving them them financial security and boosting the local economy to boot. Last September, I was thrilled to be at Swindon College's Apprenticeship Awards evening, where I saw proof first hand that success comes from hard work, determination and drive.

The Government is also driving up the standards of apprenticeships and introducing new routes into the professions, with plans to also launch the new independent, employer led, Institute for Apprenticeships. The Institute will regulate the quality of apprenticeships in England, taking on responsibility for approving new apprenticeship standards and assessment plans.  Only standards that are valued by employers will be approved and funded.

Last Saturday, I was delighted to attend the annual general meeting at St Joseph’s Church Hall in Wroughton for  CALM (Children's Cancer and Leukaemia Movement), based here in Swindon. Earlier this year, I ran the half marathon to help raise funds for CALM and another charity called Hop Skip & Jump, so the AGM is always a great opportunity for me to find out what they have been up to during the past 12 months and to vote in a new committee for the year ahead. I would like to say a huge thank you to the committee and in particular to David Elliss, for his outstanding service for many years as Treasurer.

Like many local residents, I was relieved to hear that the plans for a tower block in Old Town have been pulled. As your local MP, I am very much in favour of improvements in Old Town, but these plans were wholly inappropriate and out of place for one of the most historic parts of Swindon.  I would really like to see progress on the refurbishment of some of our existing buildings like the Corn Exchange and on Victoria Hill, for example. This decision is a real testament to people power, so thanks to all those who made their voice heard by organising and signing the petition that grew in number so quickly over the last few days.  I hope that any revised plans are more appropriate and cater properly for parking too.

As ever, please do not hesitate to contact me if you have a local or national issue that you would like to raise. You can email me at robert.buckland.mp@parliament.uk or get in touch with my team on 01793 533393.