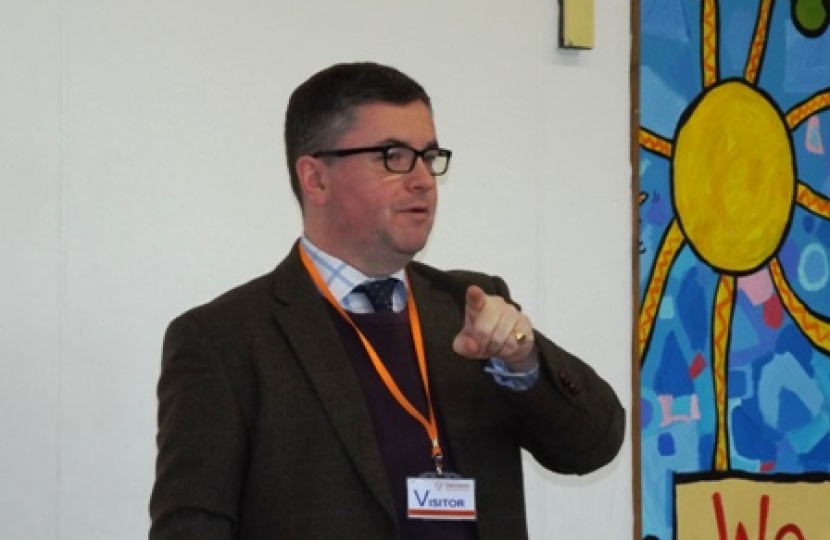 As your local MP and a local parent, one of my main priories is to ensure that Swindon’s children and young people receive high-quality education services and support, from pre-school through to college and beyond. I regularly visit schools in South Swindon and meet with dedicated headteachers and staff who are working very hard for our children.  This week's letter from the South West Regional Director of Ofsted has generated a lot of negative publicity for our town.  Whilst we should never shy away from critical analysis, I am concerned that the tone of the letter could lead people to conclude that all of our schools are failing, which is definitely not the case.

Having said that, now is not a time for any of us to bury our heads in the sand.  I will continue to visit local schools on a regular basis.  For example, last week, I had an excellent and informed discussion with Year 11 students at Churchfields where the new head and her team are working hard to improve standards. The same can be said about the new leadership at Dorcan Academy, where I shall be meeting GCSE students on Thursday. On Friday, I will be meeting the Regional Schools Commissioner in Swindon together with North Swindon MP Justin Tomlinson to raise issues from the OFSTED letter.  I will then be meeting staff and pupils at St Joseph’s Catholic College and Commonweal School as part of UK Parliament Week.

I have already spoken to councillors and Borough Council officers and will work with the Council and Government to make sure that the issues raised are addressed quickly.  We should not forget the good and outstanding schools in Swindon who are doing an excellent job and providing a high-class education to children and young people, such as Lydiard Park Academy, a school that has made remarkable progress in recent years.

When it comes to our Special Schools, five out of our six schools are good or outstanding with Uplands being named national school of the year in 2015/16.

Claims in the letter that schools are ‘’failing pupils” are too generalised and do nothing to help the morale of the dedicated and hardworking teaching staff in Swindon.

Looking at the statistics themselves, whilst there is always a need for improvement - Key Stage 2 results published in September 2016 suggest that Swindon had a lower level of attainment, in individual subjects such as grammar, spelling and punctuation, - Swindon’s results were 72%, exactly the same as the expected standard across the country.

I know that there are long standing concerns about the funding of our schools.  As your local MP, I have worked hard to ensure that Swindon’s children and young people get a fair deal. Both Justin Tomlinson and I helped secure £10 million for the Pupil Premium in Swindon, supporting children from families with lower incomes during their years at school.  We also helped to secure extra school funding worth £150 for each Swindon student for 2015/16 and lobbied for the construction of new schools in Swindon. Proposals for the 420-place Middle Wichel Church of England Academy Primary School, which will be part of the Wichelstowe development, and proposals for East Village Church of England Academy, another 420 place primary school to be located in the New Eastern Villages, have both been approved.  A decision about where Brunel ASC Free School, a 50-place secondary school for children with special educational needs, could be situated will be taken later. Money to build the schools will be provided by the Government’s Education Fund Agency and through Section 106 developer contributions.

I was very pleased when the Secretary of State for Education made a series of announcements last year, which included historic reforms to the funding formula that will finally bring an end to the unfairness in the system and extend opportunity to every child, no matter where they come from or which school they go to.  I will continue to press for these changes to come forward as quickly as possible.

The announcement also includes protection for the core schools budget. This will be over £40 billion next year, including the pupil premium - funding worth £2.5 billion a year targeted at the most disadvantaged pupils. This is the highest ever level of funding for schools of any government, which is good news for students both here in Swindon and across the country.

When it comes to leadership and ethos and working with finite budgets, very many of Swindon's teachers are doing a very good job.  As parents, we can all do our part too to help make sure that our children have the very best opportunities.