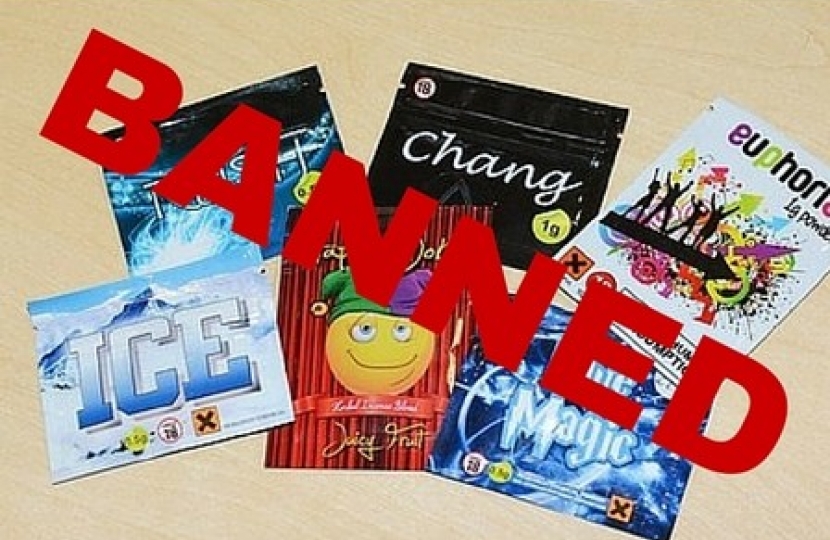 The blanket ban on so called ‘legal highs’ and tough new enforcement powers which came into effect last week is something that I whole-heartedly welcome and I have campaigned hard for. I have had a long concern about the effects that drugs have on the health and wellbeing of young people. Before I became an MP, I prosecuted and defended in drugs cases and dealt with the Misuse of Drugs Act 1971 and its limitations first hand.

Back in 2011, a substance called ‘Mexxy’ (methoxetamine) caused severe problems in my constituency and I worked closely with police to persuade the Home Office to implement a ban. In the short space of 28 days, a temporary ban had been issued and the substance is now a controlled Class B drug under the Misuse of Drugs Act.

We’ve seen dreadful cases here in Swindon which demonstrate how dangerous psychoactive substances can be. Many local residents will remember the tragic death of 23-year-old Christopher Scott who lived in my constituency and died after taking a substance called ‘AMT’ (alphamethyltriptamine). After that tragedy, I fought alongside Christopher Scott’s family who wanted the substance outlawed. AMT was classified as a Class A drug in January of last year alongside the likes of heroin and cocaine, which shows just how dangerous so called ‘legal highs’ can be.

The Psychoactive Substances Act, which came into effect on 26th May 2016, will protect young people by banning any production, supply and importation or exportation for human consumption of these potentially dangerous drugs, linked to the deaths of 144 people in the UK in 2014 alone.

The act provides a range of criminal and civil sanctions including new powers for police and tough sentences of up to 7 years for offenders.

The UK will be the first country in the world to put in place a rigorous system of testing to demonstrate that a substance is capable of having a psychoactive effect, providing evidence to support civil action and prosecutions.

When it comes to tackling these dangerous substances, we are not just talking about issues of criminality but also issues of public health and safety. The Conservative Government has a moral duty to tackle the rising number of deaths as a result of chemical highs and has already taken action by banning more than 500 potentially dangerous drugs since 2010. The Psychoactive Substances Act and tough new enforcement laws will go even further. First and foremost, my priority as MP for South Swindon is to keep my constituents safe and I will work to ensure that the ban is rigorously enforced.

The government continues to take action across prevention, treatment and recovery to reduce harmful drug use and is working with experts - including the Advisory Council on the Misuse of Drugs - to develop a new drugs strategy.

There was good news for cyclists in Swindon this week. As a keen cyclist myself who uses cycle paths in my constituency with my 13 year old son, I am delighted that Swindon has been awarded a £366,000 grant from the Department of Transport.  The money will be used by Swindon Borough Council’s Travel Choices team and will support the recently adopted Cycling Framework, which aims to double the number of cyclists over the next decade. This money is in addition to the £1.25 million given by the Swindon and Wiltshire Local Enterprise Project for Swindon Sustainable Transport project to build improved cycle routes and cycling infrastructure within Swindon.

Since 2010, the Government's spending on cycling overall has more than doubled, with £374 million committed between 2011 and 2015. In November 2014, Ministers announced a further £140 million for eight cycling ambition cities. Transport Ministers have published a draft Cycling Delivery Plan and amended the Infrastructure Act to create a "cycling and walking investment strategy" with dedicated funding. This is on top of the £600 million Local Sustainable Transport Fund where 94 out of the 96 projects contain a cycling element. Taken together this is more than any other British Government has ever invested in cycling.