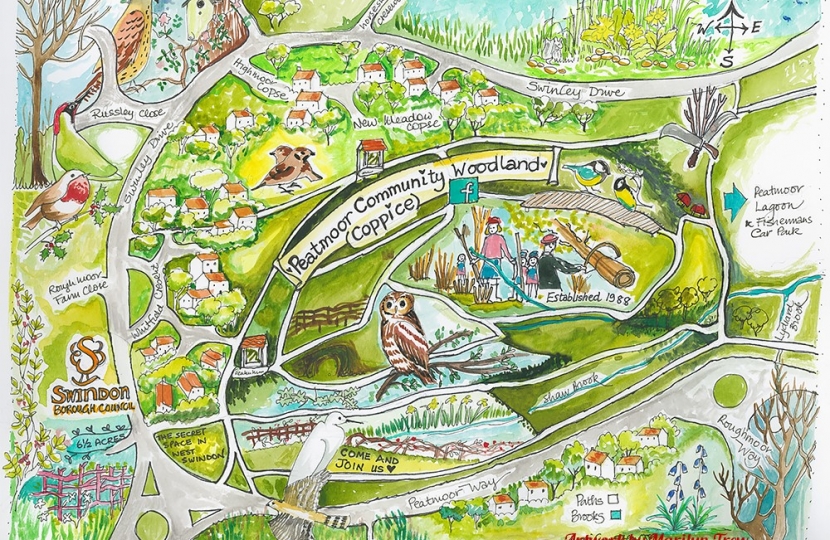 A Conservative majority government would embark on an era of “true 21st century Conservativism” by tripling tree-planting rates and creating a new £500 million fund to protect the world’s oceans to help meet its 2050 net zero target.

The new £640m Nature for Climate fund would increase tree planting in England. The government would work with the Devolved Administrations to triple UK tree-planting rates to 30,000 hectares every year – space for at least 30 million more trees – in line with recommendations from the independent Committee on Climate Change.

Existing woodland like the Northern Forest and Northumberland Forest would be expanded, new forests would be created across the country. Towns and cities would also benefit with more trees planted in urban areas to improve air quality.

The fund would also be used to restore degraded peatland across the country, turning it from a source of carbon to a means of soaking up carbon, as well as replenishing native wildlife populations.

The next Conservative Government will also launch a £500 million Blue Planet fund, resourced from the International Aid budget, to export UK expertise in marine science around the world, supporting developing countries to protect marine habitats and restore their potential to support biodiversity and tackle climate change.

The fund would also improve conditions for fishermen who rely on healthy oceans and plentiful fish stocks for their livelihoods.

“The quality of life and the state of the environment around us continues to grow in importance. There are many local initiatives here in Swindon which play an important role in protecting our future, which is why I am pleased to play my part in supporting the work of Swindon Climate Action Network.  As MP for South Swindon, I have regularly met members to discuss the Environment Bill and the Local Waste Strategy and how this can be improved.

“Here in Swindon, I am pleased that we are leading the way by working towards installing England’s first Advanced Plastic Recycling Facility, but more needs to be done to reduce the use of single waste plastic we use, which is causing suffering to animals and damaging vital habitats.

“I was pleased to add my support to the Swindon Refill Campaign when it launched last September. This project has real potential to help reduce plastic waste output in our community. I am encouraging all local businesses to sign up for the scheme.  To find out more please visit refill.org.uk.

“If elected, I will continue to work hard to support the work of local groups and ensure that their views are heard in Parliament.”

“There is nothing more conservative than protecting our environment and these measures sit alongside our world-leading commitment to net zero greenhouse gas emissions by 2050.

“But, just as with our planned investment in schools and hospitals, we can only do any of this if we end the gridlock and deadlock in parliament with a Conservative majority Government.

“That’s why we had no choice but to call this election. And it’s why the choice that people now face as they cast their votes is simple: A Jeremy Corbyn Government that will promise the earth but deliver nothing but more Brexit delay and the chaos of two referendums. Or the Conservatives getting Brexit done, acting responsibly in the national interest and moving the country forward with record investment in our NHS and bold plans for the environment.”

Establishing a £640 million Nature for Climate Fund, leaving our environment in a better condition for the next generation. The Fund will be used to dramatically increase rates of tree-planting rates in England with more research into the most appropriate species to plant across the country, a scaling up the nursery sector to grow the saplings, new partnerships with landowners, and increased planting rates on sites.

Tripling tree planting rates to 30,000 hectares a year across the UK – equivalent to 46,000 football pitches. The Government would accept the independent Climate Change Committee’s recommendation to increase tree planting across the UK to 30,000 hectares a year and work with Devolved Administrations to achieve this goal. This will deliver new forests across the country, while expanding existing plans like the Northern Forest and Northumberland Forest.

Restoring precious peatland across the country, helping wildlife to thrive as well as tackling climate change. Restoring peatland will also reduce the risk of wildfires and act as a natural way of capturing carbon out of the atmosphere.

Using the Aid budget, we will establish a new Blue Planet Fund to protect and restore our oceans…

Establishing a £500 million Blue Planet Fund to protect our oceans and support the people whose livelihoods rely on the seas. The £500 million Fund will, over the next five years, be focused on:
Strengthening governance to protect marine environments. The new fund will strengthen governance, institutional capability and regulations in developing countries – improving surveillance and enforcement - to ensure protection of our most vital marine ecosystems. By using UK satellite technology to monitor marine environments and ensure that Marine Protected Areas are not subject to illegal fishing.
Strengthening science, research and innovation to help other countries protect the oceans that are so vital to all of us. We are world leaders in marine science and research integrity. The fund will help us export our expertise and establish new partnerships for research in developing countries. We will measurably improve capacity and access to relevant knowledge in developing countries to protect marine assets and livelihoods.
Engaging the private sector, experts and local communities to encourage more sustainable fishing. We will work with large companies to demonstrate the viability of sustainable production and ocean-friendly supply chains and target small to medium scale enterprises to drive innovation and empower women-owned businesses. We will support countries in implementing port state measures to prevent landing of illegally caught fish.

Legislating to end the UK’s contribution to global warming and achieve Net Zero by 2050. We upgraded the existing target of an 80 per cent reduction in emissions in the Climate Change Act to achieve 100 per cent, or Net Zero emissions, by 2050 (Prime Minister’s Office/BEIS, Press Release, 12 June 2019, link).

Leading the world in marine protection. In May 2019, we designated 41 new Marine Conservation Zones – the most significant expansion of England’s ‘Blue Belt’ to date. The UK now has a total of 355 marine protected areas in waters around Great Britain and Northern Ireland. An independent review is currently considering whether stronger protections should be introduced (DEFRA, Press Release, 31 May 2019, link).

Robert has been acting on behalf of many local residents in the Badbury Park area who believe that they have been mis-sold leasehold properties by Persimmon Homes.