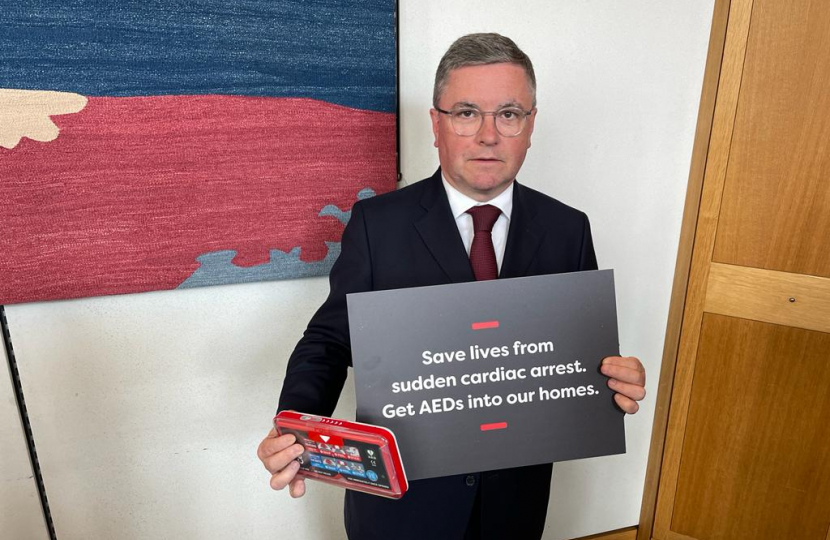 Sir Robert Buckland has attended an event in Parliament this week to support a campaign to improve access to live-saving Defibrillators.

In the UK, 150 people die per day from sudden cardiac arrest. It is one of the nation’s biggest killers, killing more people than cancer. According to the British Heart Foundation, each year, 60,000 sudden cardiac arrests happen out of hospital. The vast majority of them happen in the home (72%) or the workplace (15%) - with little to no warning.

New research carried out on the UK population reveals that only 18% of people would feel confident using a defibrillator if they witnessed a loved one suffering a sudden cardiac arrest. What’s more, 62% of adults don’t know where their nearest defibrillator is when they are at home. Survival rate is low; if a victim does not receive CPR or defibrillation within the first ten minutes, they will not survive.

Rapid Response Revival® has created the world-first personal defibrillator, CellAED®, which is a fraction of the price, size, and weight of conventional AEDs. Designed to be used by someone with no medical training, it is improving the chances of surviving a cardiac arrest, increasing access to defibrillators and overcoming barriers to their use.

“Sudden cardiac arrest is one of the country’s biggest killers. It happens quickly and kills rapidly. Without defibrillation, the chances of survival drop by 10% every minute. Without quick access to the right people, with the right equipment, people will continue to die unnecessarily.

“While there is much work to be done, I support the efforts of Rapid Response Revival® and St John Ambulance to raise awareness of sudden cardiac arrest and improve access to CPR training and live saving defibrillators.”

“Treating out-of-hospital cardiac arrest is a huge challenge in the UK. A lack of awareness is often compounded by barriers to defibrillator access. It was fantastic to meet Sir Robert to talk about how we can address these issues together. CellAED® uses new technology that has been created with the ultimate goal of improving the chances of surviving a sudden cardiac arrest, so that more people can access to a defibrillator in those critical few minutes.”

“We know that speed is everything when it comes to out-of-hospital cardiac arrests. Survival rates in this country lag far behind other nations. As the nation’s leading first aid and health response charity, our training in CPR and work with partners on widening access to early defibrillation is tackling that gap. St John welcomes any efforts to innovate in support of our lifesaving mission.We’re pleased to see so many Parliamentarians joining us today to understand the vital role that CPR training and better defibrillator access can play in saving lives.”