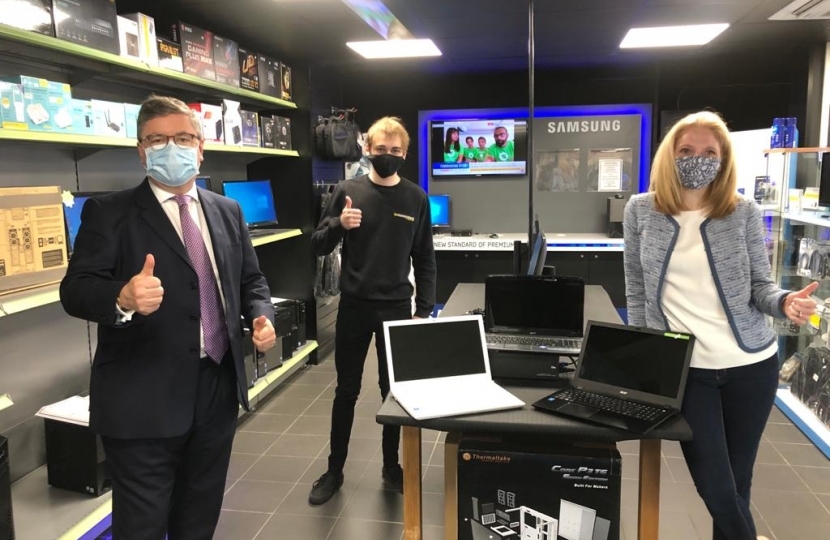 As part of the Laptops for Local Schools and Charities Scheme, Robert is now working closely with Paula Nunnery, Digital Inclusion Lead at Swindon Borough Council.

Following a generous donation of laptops from Catalent, local business, Excalibur has very kindly refurbished the devices, which were then donated to The Shop in Cavendish Square. The shop is a charitable organisation that provides affordable goods for the local community, as well as local events in Park South.

The laptops donated to The Shop, as part of Robert’s Local Laptops for Schools and Charities Scheme, will be used for drop-in sessions, to help people access their emails, book tests, and appointments online, and provide support to children due to start secondary school in September – e.g. accessing their timetables and paying for school activities, as well as lunch.

In January 2021, Robert began a 'Laptops for Local Schools Campaign' to run alongside the government's Get Help With Technology Scheme'.

The campaign called for local people and businesses to donate unused laptops so that these could be used by children for homeschooling during Covid.

Local businesses, SP Computers and Excalibur Communications took in donated devices and refurbished these ready for pupils to use.

To date, around 60 laptops have been donated to school children in Swindon through this scheme.

In May 2021, Robert decided to extend the successful green scheme so that local charities could also benefit from donated laptops.

“I am extremely proud of this successful scheme, which has been extended to benefit local charities as well as school pupils here in the town.

"I am very grateful to all of those local residents and businesses who have donated devices, not to mention the brilliant teams at Excalibur and SP Computers who have stepped up at such a difficult time and repaired hundreds of devices.

For more information about this campaign, please contact Robert by emailing robert.buckland.mp@parliament.uk or phone 01793 533393