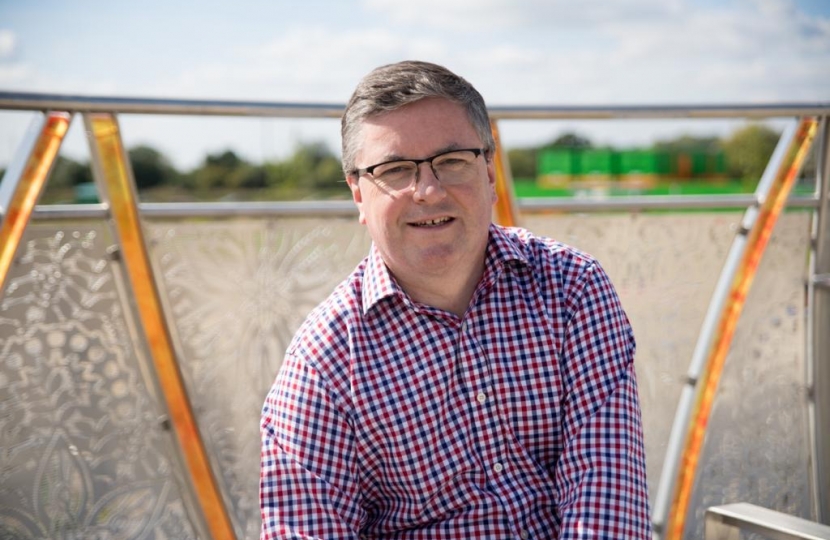 Robert Buckland was elected Member of Parliament for South Swindon at the General Election of 6th May 2010. Robert was born in Llanelli in 1968. He went to Old Road County Primary School and St. Michael’s School, Bryn. Robert went on to Hatfield College, Durham, where he became Secretary of the Junior Common Room and President of the Union Society (Michaelmas 1989), graduating in Law in 1990.

Robert attended the Inns of Court School of Law, where he was a prize winner for Advocacy and was Called to the Bar at Inner Temple in October 1991. He returned to practise in Wales, and became a tenant of Iscoed Chambers, Swansea. In 1999, Robert moved to 30 Park Place, Cardiff, where he practised in criminal law and planning. In 2007, Robert joined the newly-formed Apex Chambers at 33-35 Cathedral Road Cardiff. Robert is a door tenant at 23 Essex Street Chambers, London.

In 2009, Robert was appointed as a Recorder of the Crown Court, sitting on the Midland Circuit.

In 1997, Robert married Sian, whom he met at University. In 2002, their twin children Millicent and George, were born. They live in Wroughton.

Robert was selected as the Conservative Candidate for South Swindon in July 2004. He was a Governor of The Ridgeway School, Wroughton from 2005 to 2009 and co-ordinated the Swindon Special Educational Needs Network, which he started in 2006. At the 2005 General Election, he cut the Labour majority from over 7000 to just 1353, with one of the largest swings in the country. Robert was unanimously re-selected in January 2006. At the 2010 General Election, Robert secured a majority of over 3500, overturning Labour’s majority with a swing of 5.5%.

Robert quickly established himself as an extremely active contributor to questions and debates, and was elected to the Justice Select Committee in 2010, serving until 2013. Robert was a member of the Joint Committee on Human Rights, the Commons Standards Committee and the Commons Privileges Committee from 2012 to 2014. His main interests are justice, home affairs, international affairs, growth and development, education and disability issues. Robert chaired the All Party Parliamentary Group on Autism, the All-Party Group on the EU and is involved in groups on speech, language and communication disability and Gurkha Welfare to name but a few.

Robert was elected Joint Secretary of the Conservative Party’s 1922 Committee of Backbenchers in 2012. In January 2013, Robert won the Grassroots Diplomat Policy Driver Award for his campaigning work on Special Educational Needs both locally and nationally.

In July 2014, the Prime Minister appointed Robert as HM Solicitor General for England and Wales, as part of his Ministerial reshuffle.

At the General Election of May 2015, Robert was returned as Conservative MP for South Swindon with an increased majority of 5785 votes over Labour and a 2.2% swing to the Conservatives. Robert secured 22,777 votes and over 46% of the votes on an increased turnout from 2010. Robert was confirmed as HM Solicitor General by the Prime Minister on the formation of the Conservative Government in May 2015 and the Government of Theresa May in July 2016.

At the General Election of June 2017, Robert was returned as Conservative MP for South Swindon with a majority of 2,464 votes over Labour. Robert secured a record high of 24,809 votes andincreased his share of the vote to over 48%. Robert was confirmed as HM Solicitor General by the Prime Minster in June 2017.

Robert served as Lord Chancellor and Secretary of State for Justice from 24th July 2019 - 15th September 2021.