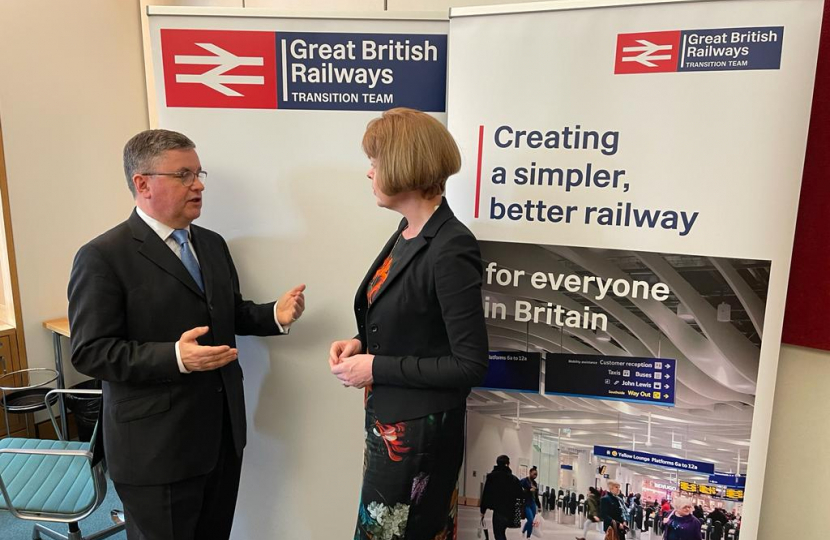 The Government is looking for a new headquarters outside London for Great British Railways (GBR), which will become the single, accountable body responsible for running Britain’s railways.

Locations across the country with strong historical links to the railway are encouraged to make the case for why they should be the new home of GBR.

The new central headquarters will be the heart of the rail network and provide strategic direction for the running of GBR.

Swindon’s rich railway heritage and its ambition for Great British Railways (GBR) to be at the centre of a world-leading rail cluster that will herald a new golden era for Britain’s railways, much like Brunel did 180 years ago, are important elements of the bid, which has cross-party support.

All bids will be measured against six key criteria, including considering how GBR will align with levelling up objectives, its location, opportunities for GBR and public support.

"Swindon is synonymous with the railways and it was great to have the opportunity last week to talk with Wendy Morton MP, the Rail Minister, about our town’s bid to host the new Great British Railways headquarters.

"I strongly believe that Swindon is the perfect location and alongside Justin Tomlinson MP, I will continue to do everything I can to support Swindon Borough Council in making our town’s case.

"If Swindon is successfully shortlisted, there will be a public vote – so please keep an eye on my social media channels and future weekly articles for more information."

I am delighted to have secured a debate in Westminster this week, to promote Swindon's Bid to host Great British Railways Headquarters.

Furthermore, along with Justin Tomlinson MP, I am pleased to have secured the support of Michelle Donelan MP in Chippenham, James Gray MP in North Wiltshire and Danny Kruger MP in Devizes.

We have sent out a joint letter of support for Swindon's Bid to Secretary of State for Transport Grant Shapps MP.

Endorsements for the HQ Bid

Endorsements have been coming in from businesses and community groups and organisations in the Swindon area and beyond, including from the following:

The support for the Bid is wide ranging, reflecting Swindon’s deep connections with the railways. A selection of quotations demonstrating the depth of Swindon’s railway connections is provided below:

A recent survey of Swindon residents shows the extent of public support, with 95% of respondents to a poll supporting the Bid.

A selection of quotes from respondees to the survey demonstrates the strength of feeling in support of the bid: