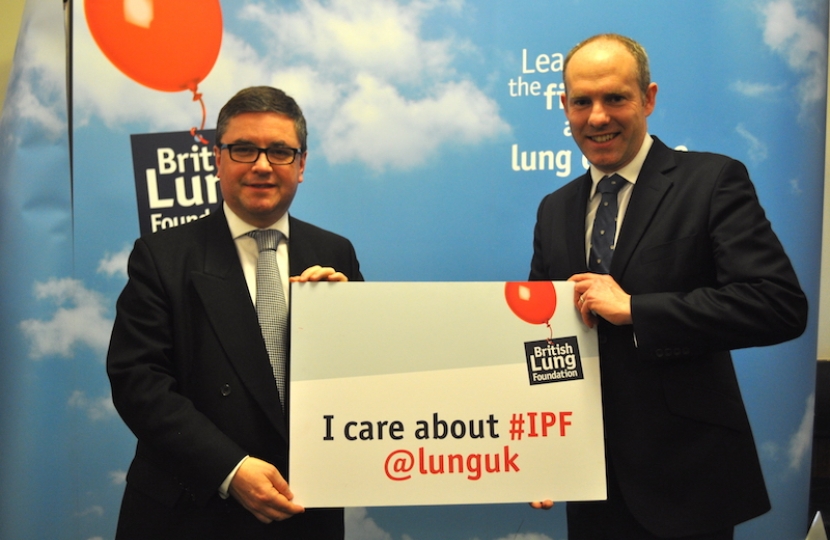 The report draws from first hand experiences of patients to highlight the lack of consistency between the best practice standards and the realities of care for those living with IPF, a progressive and incurable lung condition.

The condition kills around 5,000 people a year in the UK, more than conditions such as leukaemia, yet it remains poorly understood, with limited treatments and no cure. The disease often acts with devastating speed, with barely half of patients surviving the three years after diagnosis.

Last month the National Institute for Health and Care Excellence (NICE) published their quality standards on IPF, designed to improve care, after considering feedback from the BLF submitted on behalf of IPF patients and carers following an online survey.

Speaking after the launch, Justin Tomlinson MP for North Swindon, said: “Before we were contacted by the British Lung Foundation, we knew very little about IPF. Attending this report launch has renewed our determination to do all we can to help those in Swindon who are affected by this terrible condition.”

Robert Buckland MP for South Swindon, added: “We welcome this report and hope that it acts as a wakeup call for the need to improve IPF services, something we will help push for those affected, their families and carers.”

Ruth Fleming, IPF Project Manager at the British Lung Foundation, said: “IPF is a devastating lung condition which severely impacts the lives of those affected, their families and carers. We need to take huge steps to improve awareness among both the public and policy makers in order to make real inroads in improving patients’ lives.

“The launch of this report is one of many ways the British Lung Foundation has been campaigning to highlight the needs of IPF patients and carers across the UK and help give IPF the prioritisation it deserves.”

For more information about IPF, visit the BLF website. You can donate £5 to the BLF’s fight against IPF and other lung diseases by texting IPF to 70500.