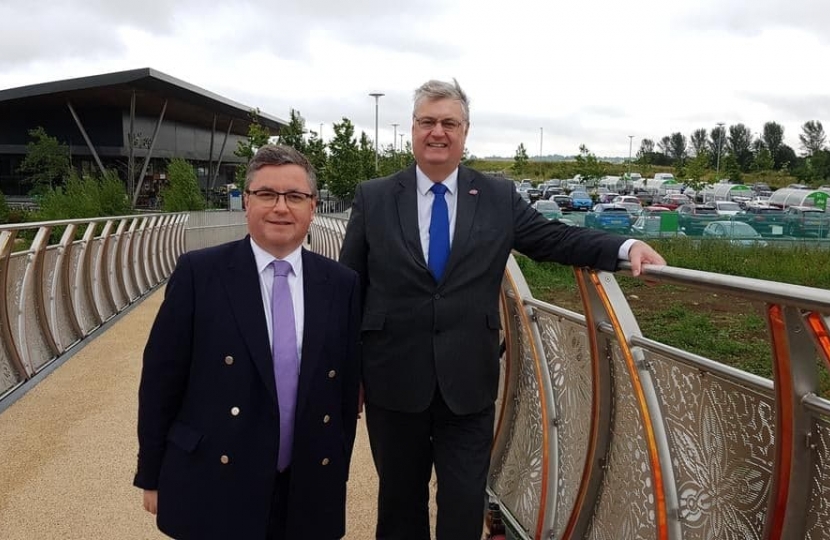 Last Friday, I was delighted, along with the Leader of the Council, David Renard, to have opened the new Wichelstowe footbridge, which runs between Waitrose and the new Hall and Woodhouse pub. The bridge is 35 metres and crosses the Wilts and Berks Canal. After many applications were submitted, Sebastien Boysen’s design was chosen. It’s a beautifully designed bridge, which features nature-inspired laser cut steel panels filled with coloured resin designed to catch the light.

This is one piece of a the very ambitious Middle Wichel development in the Canalside area, which includes houses, shops, schools and a pub/restaurant. Canalside will form the vibrant heart of Wichelstowe and mark another stage in the forward progress of our town.

I was pleased to go to Christ Church on Sunday afternoon to celebrate 100 years of the Swindon Male Voice Choir and I was even more honoured to be asked to take part in singing the Morte Christie. In 1919, the Great Western Railway Running Sheds Male Voice Choir was formed from workers of the traditional Swindon Steam Railway Works. Swindon Male Voice Choir has around 40 members who enjoy singing and harmonising to produce a beautiful sound. Shirley Ludford, manager of community radio station, Swindon 105.5, is the choir’s President and the choir is led by a very experienced Director of Music, Max Brockman-More. With it being their centenary year, they have some special events planned during the 2019-20 season to celebrate the occasion. Make sure you keep an eye out.

We have announced that two million public sector workers including police officers and teachers are to receive above-inflation pay increases, the biggest for six years.  As Prisons Minister, I have decided to follow the recommendation of the independent pay review body on prison officers’ pay in full.  Police officers will receive a 2.5% rise while the salaries of teachers and other school staff will increase by 2.75%. Soldiers will get a 2.9% increase too.  Most public-sector workers’ pay increase will be higher than the 2% rate of inflation. It is the second time the public sector workforce has received a less restricted pay rise since prime minister Theresa May ended the 1% cap on pay rises last year that had been in place since 2013.

Lastly, I would like to welcome the New Prime Minister, Boris Johnson. I believe he was the best person to deliver Brexit, who will seek to reach agreement with the EU, and work hard in that process. I also believe he will be able to unite the nation behind any deal that is done and take new initiatives on policing and infrastructure, for example. At a time when we face this unprecedented peacetime challenge, and the party system is coming under strain as never before, the situation calls for charismatic, uplifting and positive leadership, which Boris Johnson can deliver. Having campaigned with him, I have seen at close quarters his ability to speak warmly and directly to the public and to reach people to whom politics is remote and often irrelevant. As Mayor of London, he won and governed with a strong team, delivering more housing, better transport, lower knife crime and green initiatives. I am hopeful he will continue along that path and further improve our already great nation.