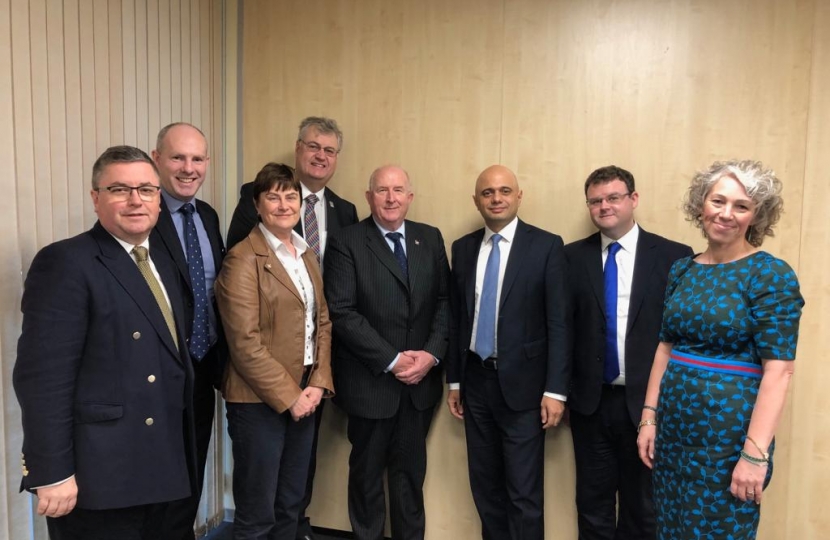 Drug crime has been with us for a long time, but in recent years we have seen organised gangs run what have become known as “County Lines” reaching out from cities such as London and Liverpool into communities including ours.  The Government and I are working hard to tackle this problem, so I was pleased to welcome the Home Secretary to Gablecross Police Station here in Swindon on Friday to discuss the work that is being carried out in our locality.

County lines involve the criminal exploitation of children and vulnerable adults by gangs and organised criminal networks involved in supplying illegal drugs.  It occurs where an individual or group takes advantage of vulnerable people to coerce, control, manipulate or deceive them.  This often involves a child or young person.

Last year, the Home Secretary announced a multi-million-pound Government commitment to steering young people away from crime and tackling violent gangs.  In my role as Solicitor General and as a Member of a Ministerial Group on knife crime, I have been involved with this directly.

Whilst in Swindon, Home Secretary, Sajid Javid, praised the work of Wiltshire Police who have developed an early intervention programme where at-risk children in the town are being mentored and actively encouraged against working for drug dealers.

I will continue to work closely with Wiltshire Police and other key local agencies to ensure to that our children and vulnerable people are prevented from being targeted by these drugs gangs.

I enjoyed meeting the team at the Swindon Wheels Project based at Oakfield Campus on Friday. This excellent local project, which has recently received a grant from the Big Lottery Fund, engages and incentivizes teenagers who are struggling with school and are at risk of dropping out through activities including restoring, repairing and re-building mopeds, motorcycles and cars.

After joining forces with Swindon Samaritans last month to support their ‘Brew Monday’ Campaign, I was pleased once again  to meet  volunteers at the Curtis Street branch on Friday to discuss their recent work and upcoming campaigns.  For over 50 years, this local charity has provided emotional support to anyone suffering a crisis in the town, as well as those suffering from isolation and loneliness.  Swindon Samaritans are always looking for people to join them, either as volunteers offering emotional support or in a variety of roles supporting the work that is needed to run the branch.  You can find out more by visiting the website or attending one of the charity’s regular information events https://www.samaritans.org/branches/swindon-district-samaritans/volunteer-opportunities#InfoEvent

Finally, I was delighted to welcome two groups of children from Millbrook Primary School to Parliament last week. I enjoyed taking part in an excellent question and answer session with the children before their tour of Number 10. If you would like to visit Parliament for a tour, or to watch a debate or committee, you can find out more by visiting https://www.parliament.uk/visiting/visiting-and-tours/