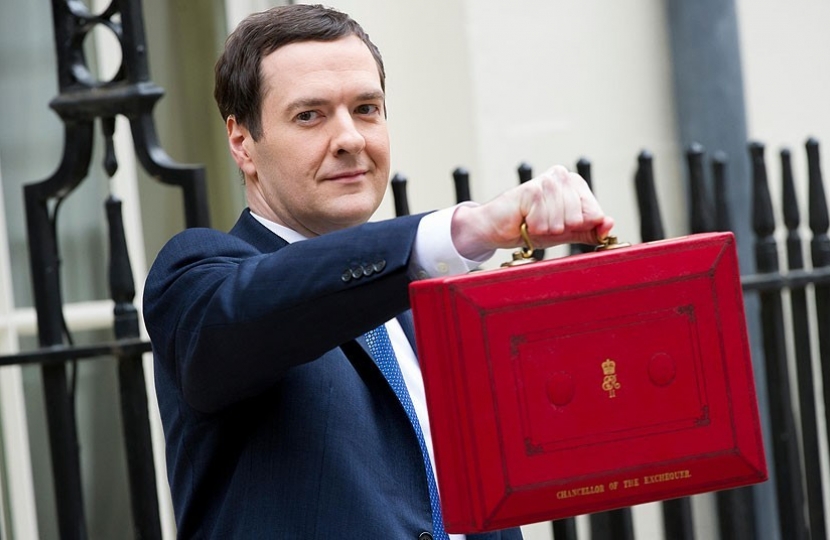 As readers of last week’s article will know, I wrote a short preview of the Chancellor’s Summer Budget which set out plans to finish the job on the deficit, keep moving to a higher wage, lower tax and lower welfare economy and put security first for families in South Swindon.

I am fully supportive of the first all-Conservative budget since 1997, and welcome the following measures as good news for hardworking taxpayers in my constituency as a local MP.

As I mentioned last Wednesday, the crisis in Greece reminds us of the importance of economic security. Recent forecasts have revealed that Britain will be the fastest growing advanced economy for a second year in a row, but the deficit is still too high. The Budget sets out a balanced plan to cut the deficit at the same rate as in the last Parliament to put this country back in the black.

The Budget also commits to our country’s national security by meeting the NATO pledge to spend 2% of our national income on defence – not just this year, but every year of this decade. Our country must always be ready to defend our freedoms and values, and I am encouraged by the government’s commitment to this level of military spending.

The government has already taken corporation tax to the lowest in the G20 (18%) and aligned it for businesses of different sizes. The Budget set out plans to reduce this rate even further, which is great news for businesses operating in South Swindon. Our town is on the up, and I hope that slashing corporation tax will continue to encourage investment from both large and small businesses.

The surprise of the day arrived in the form of a new National Living Wage, which will mean two and a half million people get a direct pay rise. Those currently on the minimum wage will see their pay rise by over a third this Parliament, a cash increase for a full time worker of over £5,000. There’s further support for working people with an increase in the tax-free personal allowance so that you will be able to earn £11,000 before paying any income tax at all. The government will also raise the 40p rate to £43,000, lifting 130,000 people out of this higher tax rate.

On a local level, I am delighted that the Oxford University Hospitals Board has agreed in favour of a Radiotherapy Centre at the GWH. This is subject to the transferred activity being funded at 100% tariff, (therefore treated at normal Oxford activity) which they fully expect to happen.

An investment of £16.5m has been approved by the OU Hospitals Board for onward transmission to the Trust Development Authority (TDA). The development of a radiotherapy service for local residents will mean that the 13,000 patient journeys to receive radiotherapy treatment will be significantly shorter every year.

On Monday, the town received the Duchess of Cornwall for the opening of a new landing stage on the Wilts and Berks canal, alongside Waitrose in West Wichel. Swindon Mayor Andrew Bennett and Wilts and Berks Canal Trust Company Secretary Chris Doyle sailed in on a beautiful narrow-boat, built by the trust in 2010, called Dragonfly. The canal will be the centrepiece of the new Middle Wichel development and will be a significant factor in attracting new amenities.  It is an exciting opportunity for our town.

The regenerated landing stage is on a mile-long stretch of the original canal restored by volunteers from the trust, of which the Duchess is patron. Wilts & Berks Canal Trust plans to connect the landing stage and restored canal in the near future to a new stretch of canal at East Wichel, which will loop around the three new Wichelstowe villages that form part of the development plan by Swindon Borough Council. I was thrilled to be part of the welcome party and pay tribute to the work of the trust to restore part of our town’s heritage.

Lastly, I would like to thank Lynette Corengia and the team for inviting me to the Gala Community Choir Festival on Sunday. As my friends and family know, I enjoy a good sing-song! It was an absolute pleasure to join local choirs at the Bowl in Old Town and support the Open Door Centre in Swindon, which delivers a fantastic service to better the lives of local adult residents with learning difficulties.

As ever, I am hosting regular surgeries at my constituency branch office on Wood Street. Please get in touch with my Swindon team on 01793 533393 to arrange a meeting.