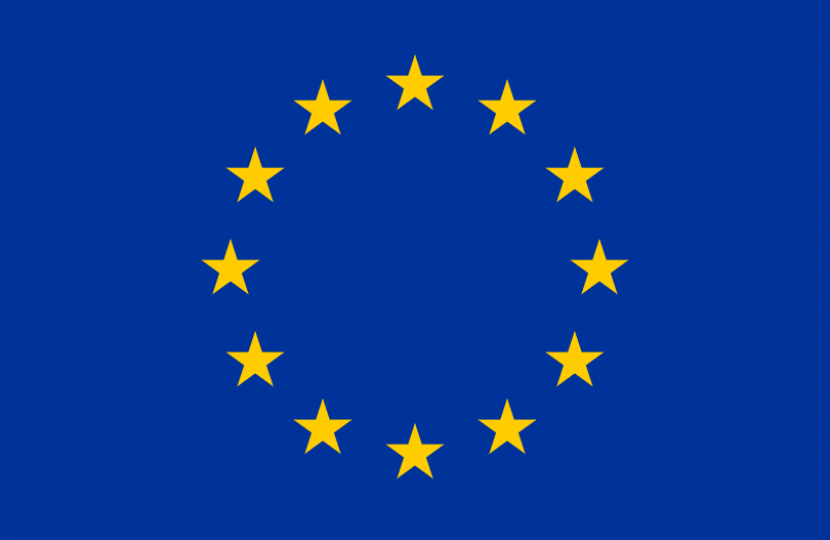 Some of you might be forgiven for being fed up of it already, but I think that I owe it to you, my fellow residents, to set out where I personally stand on the question of our membership of the EU.  On 23rd June 2016, the British people will have a once-in-a-lifetime opportunity to decide whether or not our country remains in the European Union. I supported and voted for the establishment of a referendum so that everyone could have an equal say on the issue, and this is now being delivered as part of our Government’s manifesto commitment.

On Monday, the Prime Minister made a statement to the House of Commons which outlined the outcome of nine months of negotiations with 27 other EU heads of state and government. The new settlement was dubbed the UK's ‘new special status in the EU’, and deals in detail with a number of changes that will affect not only the UK but every member state.

The settlement sets out new protections for our economy to safeguard the pound, to promote our industries. A weaker pound would be disastrous for working people, pushing up costs in particular for drivers and holidaymakers. For example, the responsibility for supervising the financial stability of the UK will always remain in the hands of the Bank of England. British taxpayers will also be protected from the costs of problems in the Eurozone, and will never be made to bail out countries in the Eurozone like Greece.

The PM also made commitments to make Europe, which is the world’s largest trading bloc, even more competitive. This could bring huge benefits to the UK by adding billions of pounds and thousands of jobs to our economy every year. For instance, the PM has said that there will now be targets to cut EU regulation on business, which means less red tape and bureaucracy.   We will also make progress on developing a single market in digital services and energy, which will help our economy.

One of the most important issues in the referendum campaign is the impact that the UK’s exit might have on migration. If the UK chooses to remain in the EU, the Prime Minister has set out a range of new measures which prevent the abuse of free movement and aims to expand on our Government’s work to discourage people from coming to our country because of our welfare system. This includes longer re-entry bans for fraudsters and people who collude in sham marriages as well as a new emergency brake so that EU migrants will have to wait 4 years until they have full access to benefits.  None of these safeguards will be there if we leave the EU, but the problem of migration will remain.  Indeed, Europe will still be there and we will still be part of it, but without any of the benefits of being a member of the EU.

The sharing of some of our nation’s power, our sovereignty, as a result of our accession in 1973 and subsequent treaty changes, has been necessary and means that we get more positive results than negative ones. The extent to which we share power is of course a moot point. On balance, it is because I am patriotic and love our country that I believe in our EU membership.

The Prime Minister believes that the best way forward is a clear commitment to reform and improvement, and I wholeheartedly agree. Our commitment to membership allows us the freedom to be frank with our European neighbors and push for changes that will benefit people here in the UK.  The process of reform, begun by the PM in this renegotiation, does not end here.

While there will be a clear Government position, this isn’t about personalities or party politics. So far, the media has focused on people at Westminster, but this is not where the issue will be decided.  This is about the real issues that affect people’s lives. The independent Confederation of British Industry estimates that the economic growth, lower prices and increased trade and investment that arise from our membership of the EU are equivalent to on average £3,000 a year for each UK household.

For workers in businesses like Honda, BMW, our life science industry or our financial services sector here in Swindon, for example, the EU isn’t about fancy theory, but about the ability to trade and work as effectively as possible so that our livelihoods can be maintained and improved. Britain’s major employers have repeatedly made clear that they believe Britain is stronger and better off in Europe.

It will be open to individual Ministers to take a different personal position while remaining part of the Government. I have long been positive about our EU membership, and I will be using my vote to stay in. I think that through the removal of barriers to goods and services, the EU has helped create a vast amount of jobs, set the conditions for more competitive prices, given us access to a wider range of products, greatly improved standards and introduced stronger protection for consumers, and provided a unified approach to tackling issues such as air and water pollution.

Most significantly, our membership of the EU has helped, together with NATO, to guarantee the peace and security of Western Europe.  At a time of increasing instability in the world, this should never be taken for granted.  The information that we share with other EU states about crime and terrorism makes the fight against crime more effective.  Britain has nothing to fear from being part of an evolving EU that makes us safer.

We now know what ‘In’ looks like, but those advocating exit from the EU haven't yet spelt out what their future vision for Britain looks like. It is time for them to say what they are for, rather than what they are against.  History teaches us that when Britain has pulled away from Europe, we get dragged back in on terms that are not to our liking, to say the least.  In short, our influence in the world is increased, not decreased, by our membership.

Whilst I believe that Swindon and Britain will be stronger, safer and better off as a member of a reformed European Union, it will be for the British people to decide this country's future by voting in or out in the Summer.  This is a once in a generation decision that will be irreversible. There will be no second chances, and no second referendum.

I will do my best to make positive arguments for staying in whilst treating those who disagree with me with respect.  And now, it is over to you to listen to the arguments and make a decision: stay or go.   I warmly welcome the coming vote and I am pleased that we will all have our say, whatever our choice may be.