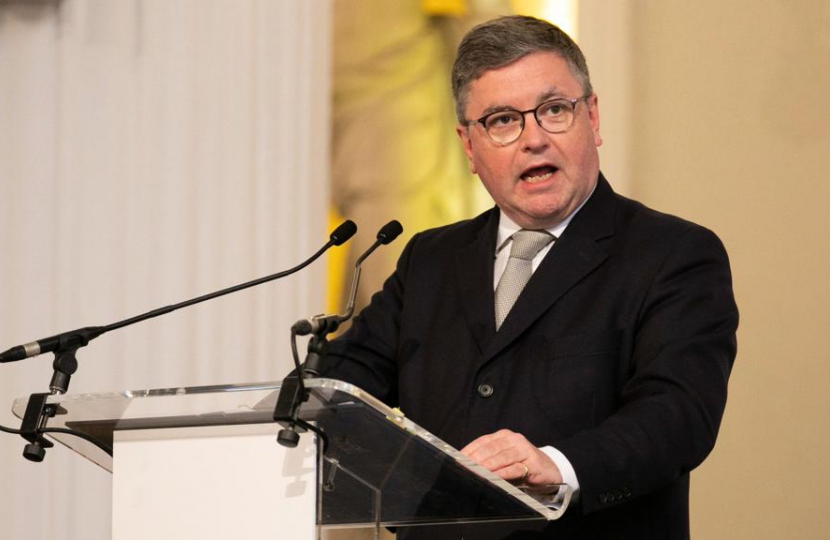 I am delighted to once again be a guest of the Law and Liberty Circle.  After a delightful pre-Christmas discussion at Westminster in which I reflected back on my time as Lord Chancellor, I was then in what can best be described as the early months of a sabbatical.  My post-Government plans, which include a Senior Fellowship at the Mossavar-Rahmani Centre for Government at Harvard Kennedy School, have been put on hold as you will be aware that I have returned to the Cabinet, this time as Secretary of State for Wales.  I am glad to say that my new office carries with it significant constitutional responsibilities and, like the office of Lord Chancellor, has been the subject of significant changes since the advent of devolution to Wales nearly twenty-five years ago.  In fact, it is almost twenty-five years to the month that a pre-legislative referendum was very narrowly won by proponents of what was then called a Welsh Assembly.  I remember it well, as I was an active spokesperson for the No campaign. Even on my wedding day, I recall taking part in a BBC debate against Peter Hain, whose justification for a “yes” vote was that it was a vote of confidence in Tony Blair.  I well remember retorting that support for a here today, gone tomorrow Prime Minister was woefully inadequate when it came to a once-in-a-generation decision such as this.  I think that events proved me to be right, even if we lost the vote.  I am particularly glad to lead on these matters at a time when my opponents continue to argue that more devolution is the answer whilst ducking the legitimate criticism that centralising forces in London have merely been replaced by centralising forces in Cardiff.

As another PM prepares to leave office, questions relating to the rule of law and our constitution have assumed some prominence in the current leadership election.  One candidate, now out of the race, advocated withdrawal from the ECHR, for example.  Apart from that, however, there has been no reference to some of the deeper and more profound questions that should be the concern of Conservatives, and indeed all conservatives, whether upper or lower case.  By this, I refer to the future of our unwritten constitution of checks and balances and the threat posed to it by the creeping rationalism of those who think that other principles should now apply.

In his parting remarks to the House of Commons in last week’s debate, the Prime Minister said that he had “seen off Brenda Hale”.  This was an odd thing to say on several levels.  Firstly, Lady Hale’s tenure at the Supreme Court was nothing to do with him, and more to do with time.  As she had reached her 75th birthday in early 2020, then her retirement was inevitable.  Secondly, in complying with the unanimous ruling of the Supreme Court on the Prorogation case in September 2019, the Government demonstrated compliance with the rule of law, even though it did not agree with the decision made and had argued a contrary case.  But perhaps, from his point of view, it was not so odd.  The stubborn belief that our senior judges are a flock of embittered Remainers with an axe to grind was allowed to fester during the Brexit years, with headlines such as “Enemies of the People” adding fuel to the fire, and even an article where pro or anti EU views were ascribed to then members of the Supreme Court ahead of their decision in the Miller I case.   If I remember rightly, the attributed views bore absolutely no relation to the individual judgments reached in that case!  Whatever the current PM’s thinking is or has been, I hope that his successor will not harbour such thoughts, as I believe them to be wholly misplaced and out of kilter with our domestic legal traditions and practice.   This thinking ignores the principle of comity, and, to coin a phrase, is  Wholly unconservative.  I have warned many times before about the dangers of politicising our judiciary, and needn’t repeat my concerns before this audience

In hoping that this period of turbulence can now be consigned to the past,

election and indeed at the next election, when it comes to our constitution and its future?  Firstly, it is clear that the pressure of time in this Parliament means that my original vision of achieving more fundamental constitutional readjustment ahead of 2024 is now difficult to realise.  Nonetheless, we should not lose sight of what could be achieved by a majority Conservative Government in this or the next Parliament.

The 2005 Constitutional Reform Act was only part of a process between 2003 and 2007 that saw major change to the role of Lord Chancellor.  The “bag of anomalies” as Bagehot described it, the “object of wonder and perplexity” as my predecessor Lord Elwyn Jones described it, the lynchpin of the constitution, bringing together the executive, legislature and judiciary in one person, was no more.

In 2003, the decision by the then Prime Minister to dismiss his Lord Chancellor and replace him was accompanied by a media announcement that the office itself was to be abolished.  After a hasty u-turn based upon the realisation that the office is referred to directly in primary legislation many hundreds of times, the position was retained.  The new Lord Chancellor, however, took on a different role from his predecessor.  A new department, the Department for Constitutional Affairs, was set up, dealing with the courts, legal aid and constitutional reform issues, with the LC sitting astride it.  The LC took a self-denying ordnance not to sit in judicial cases, and a Concordat was reached with the then LCJ, which ended the LC’s role as a member of the judiciary.  It was this document that governed my own resignation from the judiciary as a Crown Court Recorder in 2019.  Paris, I decided, was worth a mass.

Then, the 2005 Act was debated and passed.  It was not presaged by a green paper or consultation period, which I think was a mistake.  I will not dwell on the changes that led to the creation of the Supreme Court, which are best left for a fuller discussion.  The Act ended the role of the Lord Chancellor as Head of the Judiciary and President of the Chancery Division of the High Court, plus their role as Speaker of the House of Lords.  As to the first two changes, I don’t take issue with them.  The title “Head of the Judiciary” was only created by the 1870 Act and is therefore of recent invention.  The LCs role in Chancery had become more and more a practical fiction, so it made eminent sense to create the new office of Chancellor of the High Court to replace the office of Vice Chancellor, who had been carrying the administrative burden for many a year anyway.  The Speakership of the House of Lords is more debatable, in my view.  I am sure the modern arguments about administrative burden and the increasing complexity of the office would be weighed against a return to the status quo ante, but as I would personally prefer the office of LC to be drawn from the Lords, then a senior role for the office-holder in that institution makes eminent sense to me.  What is more interesting, perhaps, is the question of influence and whether a Commons role for the LC makes that better or worse.

In 2007, Lord Falconer took on the responsibility for a new Department, the Ministry of Justice, which brought together Courts, Legal Aid, Prisons and Probation under one roof.  Constitutional Affairs and related topics remained with the MOJ until 2010, when the new ODPM took them away, plus issues like Freedom of Information which went into the Cabinet Office at a slightly later date, and which have, oddly, remained there.

Later in 2007, when Gordon Brown became Prime Minister, Jack Straw became LC from the Commons, where the office has remained ever since.  3 of us have been able to wear the wig, but the rest have not.  The office lies at 5 or 6 in the Cabinet pecking order, but the most recent change was described as a demotion for the incumbent, who insisted on an extra title, that of Deputy Prime Minister, presumably for that reason.  I have said before that I find it more than a little odd that it is Nick Clegg, rather than Becket or More, that my successor would most like to emulate, but there it is.

Perhaps the most interesting aspect of the 2005 Act was what it did not do.  It did not replicate the convention that the LC should be a lawyer of standing.  Whilst there are certain criteria in Section 2 as to what the PM may take into account when recommending an LC for appointment, namely their Ministerial, Parliamentary, practitioner or academic experience plus any other experience that the PM considers relevant, this does not restrict the role to a lawyer.  The argument in favour of this wider set of criteria is, I presume, that it is the LC’s political influence that is most important.   My strong view, however, is that this is to view things through the wrong end of the telescope.

The Lord Chancellor’s Oath had originally been the Judicial Oath, but the 2005 Act created a new one, which binds the office holder to respect for the rule of law, to defend judicial independence and to provide resources for efficient and effective support for the courts.   The LC has to, from the outset, command the respect and confidence of the judiciary in the exercise of this role.  If they don’t have that, then their political influence in Cabinet and more generally is, I believe, undermined.

The creation of Her Majesty’s Courts and Tribunals Service in 2012 has tried to reflect the duality of roles between the Lord Chancellor and the Lord Chief Justice.  Rightly, judicial functions are the province of the judges.  It is, however, the LC and their department that funds the court system and which is directly accountable to Parliament for its operation.  The current arrangement means that, in reality, neither office holder has the clearest view of things.  This is the worst aspect, in my view, of the mistaken premise that underlay the 2005 Act and its accompanying changes, namely that the UK is a Separation of Powers constitution.  We are not, and if we were, much more substantial and comprehensive constitutional reform would be necessary.

Instead, we operate in a system of checks and balances.  What we should be doing is strengthening those checks and balances, by firstly making the Lord Chancellor office only open to lawyers of standing.  Secondly, the LCJ should remain as Head of the Judiciary, but give the LC sole administrative responsibility for HMCTS.  Thirdly, I suggest returning the constitutional affairs brief to the LC and divesting them of responsibility for Prisons and Probation.  Finally, we should accept the premise that an LC can be drawn from the House of Lords once again.

Amidst the sturm und drang of a Conservative leadership contest, these issues seem somewhat arcane.  They are not.  If Conservatives are to use power wisely, then they should lose no opportunity to readjust our constitutional balance in a way that respects the checks and balances principles which underly our arrangements, and to strike a blow against the cold rationalism, which, under the guise of progress, represents a real threat to the British system and its manifest qualities.