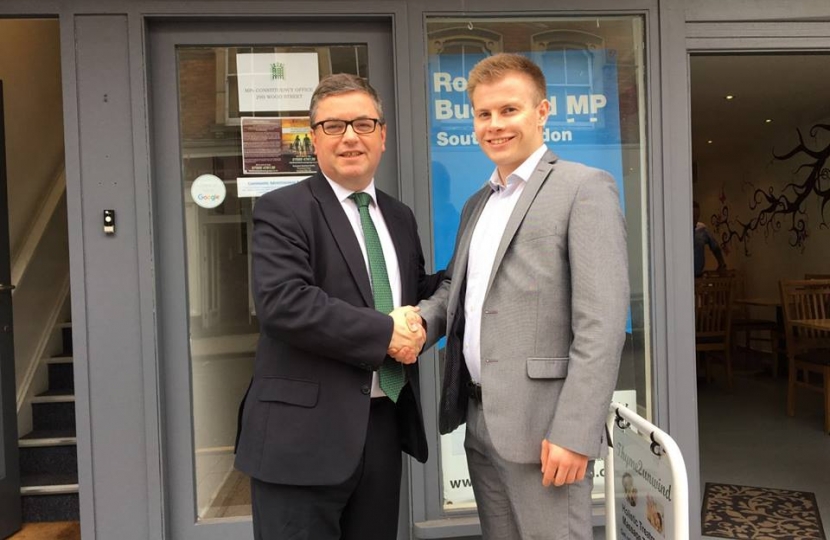 Robert Buckland MP has met with IBM Apprentice, George Marshall, to congratulate him on reaching the finals of the National Brathay Apprenticeship Challenge.

George, who lives in Swindon, began his apprenticeship with IBM in 2014. Next week, he will travel to the Lake District with a team of nine IBM apprentices from around the south of England where he will compete in the national finals against eight other teams.

Now in its fifth year, the Brathay Apprentice Challenge 2016 has seen more than 80 teams of 9 apprentices undertake a series of exciting and interactive work-related challenges to develop new skills. The activities have also showcased their employer by engaging with young people and businesses to promote the benefits of apprenticeships.

George told Robert that he was delighted to have reached the finals with his team. He said: “I have really enjoyed taking part in the challenge because it has allowed me to meet so many different people.  I have particularly enjoyed visiting schools and colleges to speak with students about apprenticeships.”

“I would like to say to anyone who is leaving school this year and considering an apprenticeship that it is definitely worth considering as an option. I have really enjoyed my time as an IT apprentice for IBM.”

Robert Buckland MP commented: “I am delighted that a Swindon apprentice has reached the finals of the National Brathay Apprenticeship Challenge.

“It is vitally important that young people have the opportunity to get into the work place. Apprenticeships give young people financial security and boost the local economy. Since 2010, over 4,440 new apprenticeships have started by people in South Swindon. This means that more young people are earning and learning.

“The National Brathay Apprenticeship Challenge further enables apprentices to gain valuable skills they need for a successful and secure future.

“I would like to congratulate George on reaching the finals and wish him the very best of luck in the Lake District next week.”